It is now nearly two years since I went to see Aldo Buzzi in Milan. I'm not sure I can recommend late December to prospective visitors of that brisk, brusque city. The days are short. The holidays are upon you. The Milanese, quite sensibly, are at home celebrating them, which means that much of the city is shut down. You can wander through the opulence of the Galleria, where thoughtful locals have ground out their cigarettes on the tile floors, but the shops are shuttered. La Scala: closed. The Duomo is open for business. But the façade is covered by scaffolding, which is covered in turn by a photographic reproduction of the façade: the architectural equivalent of a white lie. At least there are tourists in front of the Duomo, radiating heat and fellow feeling. The famous avenues devoted to fashion, meanwhile, are empty. It looks like somebody dropped the neutron bomb in the neighborhood: human life is gone, but the garish goods with their heart-stopping price tags are still on display. There are items not meant to be worn. There are furs not meant to be bought--coats clearly made from an entire conclave of minks--except possibly by Russian gangsters and their significant others. 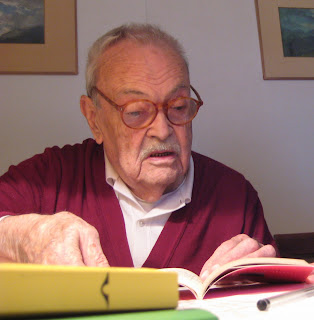 We hadn't come to see the sites, though. We had come to see Aldo. Beforehand we bought a pandoro, a Milanese holiday cake like a porous bowling ball. He lives on Via Bassini: the cab driver corrected my insufficiently sibilant pronunciation. That made me even more nervous about my bumpy Italian, but surely we could speak in English part of the time? Aldo seemed to have no problem understanding the English in my letters--although he wrote back in Italian, in the sort of spidery, correct calligraphy that you don't see much of these days.

In fact Aldo uttered only one phrase in English throughout the entire visit, which I will get to in a moment. It didn't matter. He greeted us at the door to the apartment in a red cardigan, white shirt, tortoise-shell glasses. I had wondered what sort of shape he might be in at age 97. The human body is not designed to last a century--the biological warranty expires much, much earlier, and then you are on borrowed time. But he seemed impressively spry, hobbling forward on a cane, thanking us for the cake.

More to the point was his mental agility. I was half his age and was half as lucid. He was funny, self-effacing, and remarkably patient as I scrambled verb tenses. He didn't mind. In one's tenth decade, perhaps, the past, the present, and the future have long since turned into malleable categories. The only tense you can truly rely upon: the imperfect.

We proceeded directly into the living room, where Aldo's work table was set up. He wanted to get some minor business out of the way: final corrections to my translation of some short Saul Steinberg pieces, which hadn't fit into the roughly autobiographical boundaries of Reflections and Shadows. On the table were papers, books, pens, and an impressive Japanese carving knife, which looked like it had just been removed from the box. There was also a heavy glass paperweight resembling a human eyeball. Nina snapped some photos with a digital camera as we sat at the table working. In one, the blue eyeball gazed out of the corner with an imploring look, and when Nina showed Aldo the image, he found it hilarious. Molto steinberghiano, he declared. 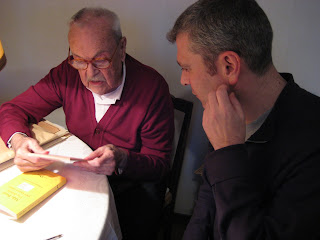 With the business done, we visited for a while. Would we like some coffee? Sure, we said. Aldo looked around the room, failed to find what he was seeking. Vanessa, he called out, summoning the nurse we had briefly met when we first showed up. When she arrived, they had a rapid conversation and she pointed out the small bell he had been looking for. She left. He lifted the bell and softly rang it. Vanessa! This time he divided the name into three affectionate syllables. She entered once more, looking amused by the whole vaudeville routine, and went off to make the coffee.

Aldo sprawled in a chair upholstered with pink roses. Nearby he had positioned his cane and a green walker, which he sadly noted had belonged to his companion Bianca. The two had been together for about 60 years: she was the sister of the director Alberto Lattuada, with whom Aldo worked during his sojourn in the postwar Italian film industry, and had died in December 2005. He hadn't needed such a device while she was still alive, he said. Now he was weaker.

But not, again, in mind. Despite the linguistic hurdles I had a number of questions for him. Why, after studying architecture during the Thirties, had he never practiced as an architect? Oh, he had tried, he said. But the beginning of his architectural career had coincided with the early years of the Second World War, and the materials--the steel, the concrete--were often diverted to military purposes. While he worked in the cinema, I asked, had he encountered Dino De Laurentiis? (I had recently translated a biography of the producer and legendary finagler, and was curious to hear any triangulating data.)

Of course he had, on several occasions. He was, for example, the assistant director on Il bandito, which Lattuada directed and De Laurentiis produced in 1946. This was evidently a seat-of-the-pants enterprise. According to the biography, "the shooting began in May, on a series of almost arbitrary locations, without any sound equipment. The dialogue was then deciphered from the script girl's notes and dubbed in at the Moviola, via a sort of reverse lip-reading." But Aldo recalled a different collaboration with DDL, during the early Fifties, in Yugoslavia. He had a vivid memory of the producer driving his big American car across the crunching snow, probably to harass the director or hit on some of the female talent.

The discussion of his film career brought us around to the very first book Aldo ever wrote: An Assistant Director's Notebook, published in 1944. It's never been translated into English, nor could the text really be extracted from the illustrations and design, which were assembled by the great Bruno Munari. (It has been reprinted in Italian, however, by the a small press called Ponte alle Grazie, which has resurrected several of Aldo's books.) When he realized I didn't have a copy, he went into the bedroom to retrieve one, waving his hand to invite us along.

In the bedroom there was a narrow bed with a carved headboard, and an old photo of Aldo with the screenwriter Ennio Flaiano, and a big, handsome Saul Steinberg watercolor hanging over the bed. It was one of Steinberg's landscapes, in which even the artist seems unsure as to whether he's creating a beautiful object or a parody of a beautiful object. Perhaps it's both at once. From a large wooden armoire Aldo withdrew a copy of his small book with its red cover. He inscribed it for me: a treasured item.


Back in the living room, we chatted some more. I sensed that he was tiring, but still game. I think he relished the company. With me translating, Nina asked if he was writing something new, and just once, he resorted to English: his pen, he said, was "in the garage." Nicely idiomatic. Sad, too, but Aldo didn't seem the type to dwell on the flagging voltage of old age, nor on the fact, noted in his letters, that almost all of his friends, family, and contemporaries were gone. He asked me what sort of work Nina did, and I explained that she wrote about esoteric financial topics, only a smattering of which I could understand. I admitted that she was smarter than I was, and Aldo smiled. È sempre cosi, he said. It's always that way.

At the doorway, adjacent to which he had jotted various phone numbers and bits of valued information on the wall with a pencil, we said goodbye. I was absolutely confident that I would see Aldo again. When I returned to the U.S., I sent him a few photos from our visit, and he wrote back: "You look so young, and I look so old!"

We correspond. His handwriting has gotten shakier, and in recent months his diminished eyesight has made it much harder for him to read--a terrible affliction for a writer. But even the briefest communications, often on tiny pieces of paper, have their glints of good humor, their impress of personality. I can't say I know Aldo well. I still hope I will see him again. It has been a privilege, in any case, to translate some of his work, to shake his hand, to observe his routine with the sweetly tolerant Vanessa (who was just filling in, it turns out, while the regular nurse was visiting her family in Bolivia). And if none of that had happened, it would have been a privilege just to read his books.

Today Aldo turns 99. I wish this marvelous man the happiest of birthdays.

Comments:
James, Delightful post as was your original Buzzi of 2 years ago.

Many thanks for stopping by, John, and I'm glad you enjoyed the post. Now if they'll just fix the video....

Lovely pieces both! Thank you from a fellow translator who happens to be also a Buzzi reader and a milanese.

Beforehand we bought a pandoro, a Milanese holiday cake

That would be a panettone: a pandoro, typical Veronese cake, you would have bought for Goffredo Parise…

Many thanks for stopping by, Marco, and I'm glad you liked the two Buzzi posts. (Of course I am also delighted to encounter a fellow Buzzi fan and a translator to boot. What sort of things do you translate?) As for the pandoro, I'm pretty sure that's what we bought, but I suppose I was wrong about its Milanese provenance. Perhaps it was a Veronese import. Alas, I never met Parise, although he sent me a nice, tiny note about the translation I had done, suggesting that I sell them to the New Yorker for a "sacco di soldi."