I'm late to this particular party, which has already been thoroughly explored by Judith Thurman at The New Yorker (here and here), but it's an irresistible scenario: a young Italian journalist publishes controversial interviews with a host of big names, including Philip Roth, John Grisham, Gore Vidal, Toni Morrison, Gunter Grass, and Nadine Gordimer. In several cases, these interviews include ideological spitballs aimed at American political culture in general or Barack Obama in particular. And then, lo and behold, it appears that the journalist, Tomasso Debenedetti, was making up these conversations out of whole cloth. Roth and Grisham immediately denied ever having met him, and since then, numerous other interview subjects have denounced his work as pure ventriloquism.

Thurman contacted Debenedetti in Rome via cell phone. In the course of their exchange, he engaged in some hilarious ducking and weaving, while insisting that the interviews were all genuine:

Debenedetti said he was completely "shocked and saddened" that all these writers would have denied the veracity of his reporting. When I asked him about the interviews with Roth and Grisham, he flatly denied having invented them, and told me that Roth and Grisham were lying for "political" reasons--because their views on Obama would make them unpopular with left-leaning intellectuals. Roth, he added, might have decided that it was impolitic to express hostility toward Obama because it might spoil his chances for the Nobel.

I then read the list of other writers who had denied or questioned his conversations with them. In every case, Debenedetti asserted that he had invented nothing. When I asked if he could produce any recordings or notes from his interviews, he laughed and, admitting that it sounded like a "tired" excuse, told me that he had lost the tapes in some cases, and in others had "thrown them away."

That's right, the dog ate his homework. What's most interesting to ponder at this point is Debenedetti's motive for this journalistic crime spree. He was paid peanuts for the interviews, so we can rule out filthy lucre as a driving force. There is also the modest (unless you're Oriana Fallaci) fame that accrues to an interviewer of the high and mighty, or at least extravagantly talented. 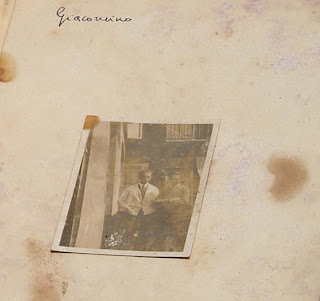 But no, Thurman pointed to more fertile ground when she noted that Debenedetti represents the third generation of an Italian literary dynasty. His grandfather, Giacomo Debenedetti, was a celebrated critic, translator of Proust, and an editor at Meridiano di Roma, whose two short books on the deportation of Roman Jews by the Germans are still in print. (He was also an early booster of the poet Umberto Saba, whose daughter kept this photo of the critic in a subsequently destroyed diary.)

Next came the fabricator's father, Antonio Debenedetti, the author not only of several works of fiction but of a highly regarded memoir of his own father, Giacomino. His fiction wears its postmodernist heart on its sleeve, with such titles as Monsieur Kitsch and In the Absence of Mister Plot. But he is also a regular contributor to Corriere della sera, where the prose tends to be less puckish, and may have actually offered his son a paradoxical role model in the course of this 2002 interview in Italia Libri. How, the interviewer asked, did he first get interested in writing?

You could say that I began to write before I knew how to write. That will sound like a curious statement--but at the age of five, I was already assembling little notebooks out of folded paper, which I clipped together and pretended were my own books.... I dreamed of becoming a writer: in an essay I wrote in the third grade, I foresaw my own literary glory in the guise of a future Pascoli or Carducci, the authors I knew at the time. I still remember this episode well, because my essay was published in the school magazine.

My suggestion about the anxiety of influence was tongue-in-cheek. Yet it's almost as if Tomasso Debenedetti inherited his father's dreams without the actual will to carry them out. Or more likely, the long string of bogus interviews was a deliberate attempt to blow the family legacy to smithereens. After all, in the age of the Internet, such dissembling couldn't be hidden forever. Sooner or later, one of his imaginary interlocutors would catch wind of the fakery, and then Debenedetti's work would be exposed for what it was: a game of pretend, no different than his father's childish ouevre, without the excuse of being a toddler. The Oedipal fallout from this mess will be no fun at all (according to Thurman's interview, father and son were no longer on speaking terms even prior to Tomasso's exposure.)

Meanwhile, I found myself wondering whether a shred of Debenedetti's interviews could be authentic. Couldn't he have spoken to somebody, at least as a break from the hard labor of making up conversations from scratch? I posed the question to a prominent Italian journalist, who preferred not to be identified, and in his eloquent if idiosyncratic English, he dismissed the very idea:

[Debenedetti] is a complete fabulist. Not even [the] smell of journalism here (he cannot explain why there is no voice record of his skyrocketing interviews.) The asshole thinks that if he keeps denying, he could get out of this mess in a way or another. Please don't let him.

Comments:
Love to read these interviews -- even as fakery. The same thought crossed my mind about "the hard labor of making up conversations from scratch." I'd like to see how successfully he took a crack at reproducing the conversational style of, say, Gore Vidal.

If he really, really reproduced the speech patterns and style of his many fake interview subjects, that would be an artistic accomplishment of a kind. Too bad he didn't package them as a postmodernist Borgesian frolic--a study of impersonation and authenticity--rather than selling them to smallish Italian papers. But he did. I also suspect they're not so phenomenal in that department to begin with.