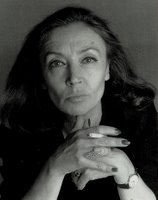 The death of Oriana Fallaci on September 15 has already prompted a string of reverential tributes and obituaries. Her lifelong habit of speaking truth to power--or sometimes shouting it at the top of her lungs--is certainly worth celebrating. So is her physical courage, which enabled her to face down bullets and burning toxins and (last but not least) Henry Kissinger in his aphrodisiacal prime. Still, Fallaci seems like an odd candidate for hagiography. She was too unruly, too explosive, to qualify for plaster sainthood. And during the final decades of her life, her ego--always at war with her sense of moral outrage--got the upper hand a little too often.

A case in point would be...well, my own. In 1990 I was hired to translate Inshallah. This massive slab of a novel, which had shattered sales records in the author's native land, was set in Beirut during the fall of 1983. At that point, suicide bombers had just struck the French and American peacekeeping forces, and the Italian contingent was anxiously awaiting its turn. Oriana, who had spent some time on the ground in Beirut, seasoned her epic with plenty of blood, guts, and profanity. In fact it was the latter ingredient that got me the gig. I was younger than your average translator, and presumably more foul-mouthed, which meant that I would have less trouble with such sizzling locutions as cazzo d'un cazzo stracazzato (more on that later).

I was soon directed to a brownstone on the Upper East Side for my first meeting with the author. Oriana, who was then a spry and demonstrative 60, greeted me at the door. To the immediate left was her office, with papers and books piled on the desk and a big map of Beirut on the wall. But she motioned for me to follow her upstairs, where we sat down at a glass-topped coffee table in the living room. There were photographs and posters everywhere, including some relics of the Italian Resistance--but to be frank, you didn't study the décor when you were in Oriana's presence. You looked at her: the oval face, the pronounced cheekbones, the pale eyes, which were widely set and italicized with black eyeliner. While I sat there, jiggling my knees in awe, she gave me some pointers on tone and diction.

"James!" My name invariably had two syllables. "James, you know the writing of Hemingway?"

"You must translate my book like him. The words must--" She made a dive-bombing hand gesture. There was some linguistic groping, and we figured out that the words were supposed to ski down the page.

I was struck by the fact that a feminist icon like Oriana would want her book to sound like a macho guy in a pith helmet. But she liked a straight shooter, and was determined in any case to make Papa look like a girly man, as I soon discovered.

"You know what cazzo is, James?"

"A dick," she corrected me. "This phrase--cazzo d'un cazzo stracazzato--I have added it to the Italian language. People use it now."

She ushered me out. For the next ten months, I threw myself into the job, and from time to time we would meet for a consultation. Once she was kind enough to make me a hamburger for lunch: she ground the beef herself, not trusting the meat at the supermarket, and kept up the conversation the whole time. Was I doing any freelance work in addition to Inshallah?

"James, James." She shook her head. "Focus on my book. There is a big hurry."

"I won't miss my deadline."

While I ate the hamburger, she took a break to shout at somebody on the telephone. "Cretino!" she kept exclaiming, and I felt a stab of pity for whoever was on the other end. Luckily I seemed to be in her good graces. During a subsequent meeting, in her office on the top floor of the Rizzoli bookstore, she called somebody else a cretino on the telephone, but this time the epithet had a wearier sound to it. Her father had just died. Eating bits of some polenta-like substance from a wad of aluminum foil--her teeth were bothering her, too--she asked me to look over the English version of a memorial speech she had written for him. I was touched. She wasn't a person who relished displays of vulnerability. Might we become friends? 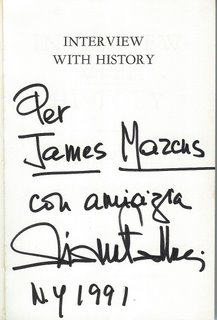 At this point, in early 1991, our meetings were interrupted--courtesy of Saddam Hussein, who really did belong in the jackbooted rogue's gallery that is Interview With History. Iraq had annexed Kuwait over the summer. In February the United States and its allies unleashed Operation Desert Storm, which would drive Saddam from his new protectorate in just four days. At once Oriana jetted off to Saudi Arabia, determined to dodge the Pentagon rules on pool reporting. She would get to the front or die trying--or, at least, put her Saudi guide in the hospital with heart palpitations. She did eventually get close enough to inhale fumes from the burning Kuwaiti oil wells. "The black cloud has destroyed me!" she insisted at our next meeting. The verb had three syllables. I saw her one last time, in July, and then handed in my 1,050-page translation in the fall.

Now things got sticky. As I would later learn, Oriana had already put the French translator of Inshallah through the wringer. After fiddling with his work, she had tossed it aside and substantially rewritten the novel in French. When it hit the shelves, the translation was credited to one Victor France--not the most creative pseudonym in the world.

As it turned out, she was now doing the same thing with my own manuscript, staging the equivalent of Sherman's March through nearly 300,000 words of text. The problem--aside from my wounded self-esteem--was that Oriana had a much shakier command of English than French. Her alterations, some of which I was allowed to read, were an absolute disaster. A copy editor, who deserved the Pulitzer Prize for damage control, cleaned up the worst of it. Meanwhile, the author demanded that she receive credit for the translation.

What followed were several months of ugly skirmishing. The editor at the publishing house, who was clearly scared of Oriana (who wasn't?), turned the whole matter over to the legal department. I got a lawyer of my own. There were meetings, faxes, memos fired back and forth, even a session with the president of Doubleday. Needless to say, Oriana and I never spoke again. And Inshallah, when it was finally published in 1992, was a flop. That was the only poetic justice I was granted, since the final formulation on the title page didn't exactly ring my bell: Translation by Oriana Fallaci from a translation by James Marcus. Pure nonsense. At least she didn't trot out Johnny America as a pseudonym.

All this, you might argue, is old business. Indeed it is: with the passage of time, the pain has faded and I can enjoy the comedic aspect of the whole mess. But an author who's willing to butcher her own magnum opus because can't understand how English verbs operate is something of a cretino herself. I will always admire the pugnacious conversations collected in Interview With History--nobody ever roasted a dictator over the coals with such finesse and focused rage. The two final polemics on Islam, which Oriana really did translate herself, showcase her contrarian fire (which is good) and her childish xenophobia (not so good). I’m still waiting for the memoir she was rumored to be writing in the wake of Inshallah. And despite the way she treated me, I can't help but retain a shred of affection for this impossible woman, mourning her father's death and delicately chewing on one side of her mouth. As for that black cloud--it never had a chance.

Comments:
My goodness...personal contact (Tsuris, even!) with Fallaci! I'm too entertained by this anecdote to be jealous, but only just. The daft arrogance of her re-translation speaks not only volumes about the 'Type A' literary celebrity but also the tantrum-prone era of Fallaci's heyday. Though how could she have bested the likes of Kissinger and Qaddafi if she hadn't had a bit of Henry and Muammar in her own makeup?

Agree with her take on the baby-and-the-bathwater of Muslims and Islamism or wince at it, she (along with Martin Amis) was one of the few public figures in the West to express an opinion on the topic not rendered meaningless by PC equivocation. Perhaps it was her experience (after Mexico?) that the high road isn't always the safest?

Just finished reading your (her!) translation, and I have to say the I think that the man at DoubleDay certainly does need a Pulitzer prize because I loved it. For want of being a cynic, perhaps the recent developments in Lebanon are a chance to get this book read by an English-speaking public. Whatever her character this book deserves to be read!