On Sunday, Newsday ran my review of Alex Ross's The Rest Is Noise. I've mentioned this book before, and was practically palpitating with eagerness to read the whole thing. I loved it. Ross has gotten a little bit of flak for not paying sufficient mind to jazz and popular music. He does in fact include a long segment on George Gershwin and a more telegraphic treatment of Duke Ellington, and certainly acknowledges the impact of these giants on their starchier peers. But Ross doesn't pretend to deal with every facet of twentieth-century music: his avowed subject is classical music, and it seems churlish to complain because he didn't pay homage to "Ball of Confusion" or (God forbid) "A Fifth of Beethoven." I began this way: 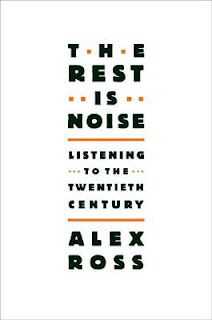 Robert Frost once referred to his life--and by extension, his art--as a sustained "lover's quarrel with the world." On the basis of Alex Ross' superb study of contemporary classical music, The Rest Is Noise, we might ascribe a related clash to the composers of the last century: a lover's quarrel with the audience. There is, to be sure, more than a sprinkling of populists in the author's pantheon. Such card-carrying modernists as Aaron Copland, Dmitri Shostakovich and Igor Stravinsky managed to wheedle their way into the public's heart--and none other than Arnold Schoenberg earned a hysterical ovation at the 1913 premiere of "Gurre-Lieder," as if he had just won the final round of Dodecaphonic Idol. Still, it's been a century of tough sledding for audience and artists alike, even as the skirmishes between atonal Crips and diatonic Bloods finally dissolved into a postmodern free-for-all.

Not that Ross is hanging his head over these developments. They make for a bracing narrative, which he traces back to the primordial friction between Richard Strauss and Gustav Mahler, the twin titans of the late Romantic era. His book opens, in fact, at the Austrian premiere of Strauss' "Salome" in 1906. In this adaptation of Oscar Wilde's scandalous play, the crowd-pleasing composer knew exactly how far he could stray from the safe harbor of traditional harmony. He kicked off the opera by stacking two distant keys atop one another, plunging the listener into what Ross calls "an environment where bodies and ideas circulate freely, where opposites meet." Yet the audience ate it up, seduced by the onstage kinkiness and by Strauss' insinuating score.

You can read the rest here, and visit the author's excellent website here. Meanwhile, I attended a Caetano Veloso show last night. There was a line stretching around the block--not bad for a 65-year-old Brazilian man who didn't even start recording for an American label until the mid-1980s. Inside, we were surrounded by the liquid sounds of Portuguese, a language that seems always to be spoken in an undertone, even when the speakers are shouting at each other in the subterranean bowels of the Nokia Theater.

Veloso emerged in a denim leisure suit, the jacket of which he breezily discarded halfway through the evening. He was accompanied by the tight, noisy trio that backed him up on Cê, and much of the set was drawn from this atypically punkish recording. There was a stentorian version of "Odeio," with the entire audience joining Veloso for the chorus. (Afterwards, he did a quick gloss for the non-Portuguese speakers in the crowd: "I hate you, I hate you, I hate.") Even more wrenching was "Minhas Lagrimas," a dirge-like piece whose texture was thickened by Veloso's electrified nylon-string guitar. This YouTube video is not from last night's concert, but it should give you the idea:

Veloso is a splendidly theatrical performer. His hand gestures alone are probably worth a scholarly monograph. (My favorite: the sideways fluttering that seems to indicate that his fingertips are on fire.) His energy belies his age, as do the abs he briefly, comically flashed to the adoring crowd, not making any attempt to hide the love handles, either. But despite the agile accompaniment and his pogo-stick levitations from one side of the stage to the other, I was probably most captivated by Veloso's brief solo turn. There's no doubt he could spend the rest of his life touring with just a stool and an acoustic guitar. The fact that he doesn't is one more proof of his restless artistry. Yet that feathery tenor, with its subdued laughter and subdued tears and its winking, mercurial falsetto, remains a marvel--and you can hear it best when it's just Veloso and his guitar, plus the thousands of audience members haloing his every phrase. Last night he did "Cucurrucucu Paloma," and had the entire theater eating out of his hand. Clearly this video, with its Hockney-comes-to-life preamble, is also not from last night's concert. But you won't find any sexier birdcalls in this life:

By the way, I attended the concert with Richard Gehr, proprietor of the diabolically smart and amusing Music For Grownups blog. Go, read, listen, and be enlightened. (Just for the record, Richard doesn't really look like a Baldwin pear with glasses on--that's artistic license for you.)

Comments:
Heh. Saw the Veloso show a week or so ago at Hill Auditorium in Ann Arbor and he was fantastic. The guy does not age. Although it wasn't quite as much fun as his show at the Chicago Theater in Chicago five or six years ago, when it seemed that half the audience was singing along in Portuguese. Who knew?

On a completely unrelated note, been meaning to recommend Albert Halberstadt's book on Doc Pomus, which I suspect you'd enjoy as much as I did.

Hi! Just to say that this performance by Caetano Veloso is from Pedro Almodovar's film "Habla con ella" ("Talk to her"). Also, I'm portuguese. Who knew, ha?

Hi Sam, and thanks for stopping by. I'll have to run down the Doc Pomus book--definitely my kind of thing. As for anonymous, thanks as well. I did eventually figure out that the clip was from "Talk to Her," which I actually saw (but can't remember too well). It's beautiful in any case.