According to an excerpt from Alex Ross's The Rest Is Noise: Listening To The Twentieth Century, it was a family feud (at least in part) that put young Gustav Mahler on the path to musical greatness:

The family atmosphere was tense. Mahler recalled a time when he ran out of the house to escape an argument between his parents. On the street, he heard a barrel organ playing the tune, "Ach, du lieber Augustin." He told this story to Sigmund Freud, in 1910, during a psychoanalytic session that took the form of a four-hour walk. "From then on," Freud concluded, "the conjunction of high tragedy and light amusement was inextricably fixed in his mind."

Mine too. Now, the song in question is more than three centuries old. It originated during the Plague Years in Vienna, and recounts the vicissitudes of a drunk who has passed out on his way home and been mistakenly tossed on the corpse wagon. In a scene straight out of Monty Python and the Holy Grail, Augustin regains consciousness and insists that he's not dead yet. The shocked mortician bursts into song. Clearly Augustin is worse for the wear: "Rock ist weg, Stock ist weg / Augustin liegt im Dreck. / Ach, du lieber Augustin, / Alles ist hin!" Which is to say:

His coat is gone, cane is gone,
Swimming in filth.
O, my dear friend Augustin
All is kaput!

It gets funnier. Because the grubby lyrics (Dreck could just as easily be translated as "shit") went through the homogenizer, and eventually the same tune resurfaced as "The More We Get Together," which I sang back in nursery school. It's one of those melodies that early exposure burned into my brain, along with various commercials ("Wouldn't you really rather have a Buick?") and the tongue-in-cheek theme from Batman and most of the Beatles catalogue. This is the mulch of my musical consciousness, such as it is. 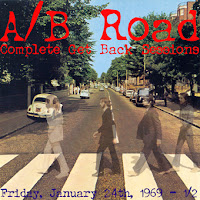 Which brings me back to square one. On January 24, 1969, the Beatles were recording at the newly completed Apple Studios at 3 Savile Row. The Fabs were not getting along, having nearly called it quits earlier the same month when the Let It Be film shoot got especially ugly. Now their spirits were a little lighter, and between serious bouts of rehearsal they raked through their own musical mulch, tossing off such oddities as "Hey Liley Liley Ho," "Balls To Your Partner," "I Fancy My Chances," "Diggin' My Potatoes"--and a quick snatch of "Ach, du lieber Augustin." The lyrics have changed again. "Balls to Mister Banglestein, Banglestein, Banglestein," sings McCartney, in a daft revision that I assumed was original. Wrong again. Apparently Anthony Burgess mentions it as well (I have no idea where). And the author of this MySpace blog seems not only familiar with the song but determined to reproduce the drunken scenario of the German original, thanks to "twenty-odd Shaeffers, PBRs, and cans of keg Natty Ice." It's a strange, concentric world. The more we get together, the happier we'll be. That's the theory, anyway.