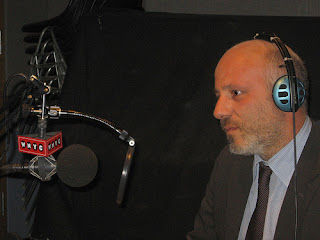 It's been a busy week for me over at the Netscape Blog. First I posted a conversation with Carlo Bonini, one half of the investigatory duo that Michael Isikoff calls "the Woodward and Bernstein of Italian journalism." Mostly we talked about the forged yellowcake dossier--a story that Bonini and his partner Giuseppe D'Avanzo were the first to break in any detail. But we touched on a few of the other issues discussed in Collusion, including Italy's domestic antiterror campaign and the practice of extraordinary rendition. Luckily Carlo's English is excellent. Otherwise the interview would have been conducted via pidgin Italian, colorful hand gestures, and rapid crayon drawings. Here's a salient exchange:

Marcus: Were you and your partner ever discouraged from following up on the [yellowcake] story?

Bonini: We were under enormous pressure at times. The right-wing press started attacking us, saying that we had personal motives--or worse, that we were reporting on behalf of some mysterious U.S. intelligence officers. Four years later, I still can't understand what sort of argument they were trying to make. It probably reflected the fact that SISMI was afraid of being blamed for the whole mess by the CIA. So yes, there were moments when we felt alone. "Either we're nuts," we told ourselves, "or we're right." I mean, it was hard to believe that Rocco Martino's phony documents ended up in the White House. But that's what happened!

Marcus: Nigergate is the first intelligence screw-up you describe in Collusion. The next chapter is about the famous aluminum tubes, which the Bush Administration claimed were parts for Iraqi centrifuges. Yet the Italians always knew otherwise, didn't they?

Bonini: Of course. The Iraqis had definitely bought huge numbers of aluminum tubes. But those tubes were designed for a conventional missile system that Iraq had developed with the Italians back in the 1980s. The system we're talking about is called the Medusa 81, and the rockets required exactly that sort of aluminum tube, with very particular specifications. And SISMI was well aware of this.

Marcus: Did SISMI pass along that information to the Americans?

Bonini: When the U.S. intelligence community first began discussing the tubes, they asked the Italians to weigh in. And the Italians said nothing. Only 14 months after the invasion of Iraq did they tell the Americans what they had always known.

You can read the rest here. Meanwhile, I also posted a review of Endless Highway: The Music of The Band. I began this way:

Although The Band never sold as many records as its rock-and-roll peers, this elusive aggregation of four Canadians and one Arkansas good old boy certainly entered the pantheon before calling it quits in 1976. Who else could have marshaled such a mind-blowing parade of stars for its farewell gig, culminating with a rare appearance by former employer Bob Dylan? 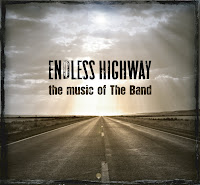 Yet the group's catalog of songs has spawned relatively few memorable covers. Sure, Joan Baez scored a hit with her clueless version of "The Night They Drove Old Dixie Down" in 1971. And just about every performer on the planet has taken a crack at "The Weight," including Waylon Jennings, Cassandra Wilson, Joe Cocker, Aretha Franklin, Diana Ross, and even the Moog synthesizer posse on Switched-On Rock. Often, though, the songs have been given a wide berth. With their funky vibe, rough-hewn harmonies, and tintype vision of the old, weird America, they probably scared off a good many candidates.

I know, the tension is unbearable, so I'll go ahead and reveal my favorite performance on the disc: Guster (a college-circuit favorite I never heard before) doing an eccentric, vaguely Wilco-like version of "This Wheel's On Fire." Second place goes to big bad baritone Josh Turner for "When I Paint My Masterpiece." You can read the whole piece here. 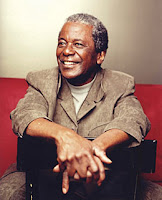 I was sad to read about the death of pianist and composer Andrew Hill, who died of lung cancer on April 20. He was a gnarly original, drawn to asymmetrical shapes and long, rock-skipping melodies, and to some extent he kept falling through the cracks. Every decade or so Hill would be rediscovered--but he was there all along. His 1964 recording Point of Departure still thrills, with its glittering personnel (Kenny Dorham, Eric Dolphy, Joe Henderson, Tony Williams, Richard Davis) and improvisational steeplechases. He was also a magical soloist at the piano, and I have vivid memories of a string quartet Hill composed back in 1996, when he was teaching at Portland State University. Was it jazz? Not really--Hill had studied with Paul Hindemith as a young man and knew the post-Romantic idiom inside out. Yet the phrases breathed, broke, and reassembled themselves with a jazzy fluency. You can read Ben Ratliff's obituary here, and Paul Olson's 2006 interview here. 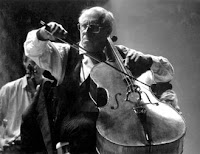 Additional news flash: I just read about the death of Mtislav Rostropovich. Terrible. The giants are departing, and they don't get any bigger than this one, whose recording of the Debussy Cello Sonata (with Benjamin Britten) has been in my top rotation for the past twenty years. I wrote about him last April, when I saw him conduct Shostakovich's Violin Concerto No. 1 and Symphony No. 5, and quoted his recollection of his enchanted collaboration with the composer:

Shortly after my return to Moscow I received three letters from Shostakovich, which became my most treasured possessions. They were like love-letters, and became a kind of talisman for me. I kept them by my bedside table and read them constantly. The first letter started with these words, "Slava, I am completely intoxicated by what you have done to me, by the sheer delight you have given to me." I don't wish to continue to quote Dmitri Dmitriyevich's words, as they would sound completely implausible. Then one fine day I couldn't find the letters. I asked our maid Rimma where they were. She had seen me hunting for them high and low for three days, but she was too frightened to tell me straight away that she had thrown these treasured letters into the rubbish bin.

You can read the entire post here, and Allan Koznin's obituary here. This is, like I said, a sad day.

Comments:
Thanks for this post, James - I hadn't heard. And the quoted story about the letters makes me blood run cold.