There was just a long, kettle-drum-like roll of thunder outside. Inside, warm and dry, I was thumbing through Jeremy Treglown's biography of V.S. Pritchett, and came across this excellent bit from Sir Victor:

How touching and hapless one's elders looked when one spotted them on their own: lonely Shaw looking into the window of the gun shop in the Strand, Wells with a fly button undone in a club, Yeats with a detective novel fallen on his chest, Chesterton at the window of a pub restaurant off Leicester Square, also asleep, with his head on the table-top marble--the clown in all the passive dignity of private life.

Fascinating and strange. London sounds like a vast petting zoo of narcoleptic geniuses. Then again, we all know what he's talking about. Why, just the other day I saw Toni Morrison at the Dunkin' Donuts again, slumped over her French cruller and coffee. 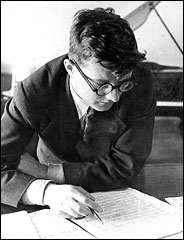 On a different note: we went to see Mstislav Rostropovich conduct Shostakovich's Violin Concerto No. 1 and Symphony No. 5 on Saturday night. At age 79, the conductor looked a little frail--his black jacket seemed to hang off his shoulders--and I wondered whether there would be many more opportunities to hear him play the cello (his version of the Debussy Cello Sonata with Benjamin Britten on piano is one of my favorite recordings ever). Yet his very presence on the podium was amazing to contemplate. Rostropovich's friendship with the composer goes back to 1943, when the 16-year-old cellist attended his orchestration classes at the Moscow Conservatoire. Nearly two decades later, in 1959, Shostakovich wrote the First Cello Concerto expressly for his old pupil. Flattered to the max, Rostropovich hurried to Leningrad and spent three days memorizing his part. His performance (using a skeleton score for piano and cello) greatly moved the composer, and as Rostropovich recounts in Elizabeth Wilson's Shostakovich: A Life Remembered, he was soon the recipient of not one but three fan letters:

Shortly after my return to Moscow I received three letters from Shostakovich, which became my most treasured possessions. They were like love-letters, and became a kind of talisman for me. I kept them by my bedside table and read them constantly. The first letter started with these words, "Slava, I am completely intoxicated by what you have done to me, by the sheer delight you have given to me." I don't wish to continue to quote Dmitri Dmitriyevich's words, as they would sound completely implausible. Then one fine day I couldn't find the letters. I asked our maid Rimma where they were. She had seen me hunting for them high and low for three days, but she was too frightened to tell me straight away that she had thrown these treasured letters into the rubbish bin.

Anyway, Maxim Vengerov played the Violin Concerto, with its desolate slow movements and frantic, high-stepping Scherzo and Burlesque. He was tremendous. The first movement is a killer--13 minutes of nonstop pain and perplexion--and Vengerov kept the momentum going the whole time. His intonation is beautiful and his fast, narrow vibrato seems perfect for this music, which should never sound mawkish. It's somber stuff. Even the fast movements, with their rocking tempi and grimacing xylophone parts, have a nervous intensity to them. (You try smiling when Stalin is standing on your toes--or your neck.) A bummer, no? For the listener, though, there's a paradoxical payoff: joy.