LA, Merrill, NBA, and yours truly 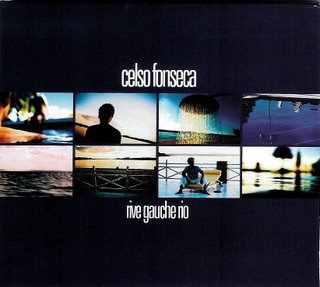 We flew out to Los Angeles last weekend for a wedding party. I had assumed that any motel in Marina del Rey would offer a stunning view of the ocean: instead we were trapped in a mile-long, modular strip mall, with a shuttered Thai restaurant to the left and a rapidly sinking Tower Records to the right. Sigh. Luckily the Pacific was nearby, looking more blue and benign than the violence-prone Atlantic. More to the point, there was premium outlet mall only 50 miles away, and Nina was determined to go shopping. I put up the usual sputtering protest, then climbed into the rental car. On the way to the mall, driving though dun-colored hills that looked exactly (as Nina pointed out) like kneeling camels, we did listen to the CD I had bought at Tower: Celso Fonseca's Rive Gauche Rio, which the bankrupt chain was unloading for a mere $5.09. Fonseca reminds me just a little of my idol Vinicius Cantuaria, but he's more of traditionalist, with a higher, feathery voice that suggests Caetano Veloso. I liked it. It's not ideal listening in a noisy rental car--in fact, the acoustics of the Chevy Cobalt might have been specifically designed to erase all the murmuring subtleties of a neo-bossa CD like this--but it certainly eased the trip to the mall. Once we got there, Nina made a quick reconnaissance of the beloved brand names and began popping in and out of stores. I was shocked and pleased to find a bookseller. Even better: they were selling a mint copy of James Merrill's Collected Prose for a pittance. I took my prize outside and read in the afternoon sun until Nina showed up with a very reasonably priced skirt. 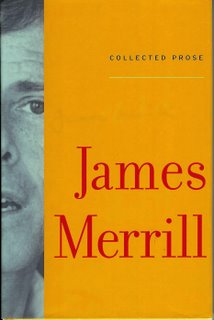 Merrill, one of the oddest and most supernaturally fluent poets of the last century, makes no great claims for his prose. In fact it strikes him as a medium of painful (if practical) redundancy: the same thing over and over, not unlike the boxcar alternation of coffeeshops, pharmacies, and dry cleaners in Marina del Rey. Yet prose, like death and taxes, is always with us. As Merrill says:

There are after all things to be said for prose. I still read it, often with more profit than I do poetry. I go on using it for letters, conversation, the recording of dreams, and so forth. It is not that much harder to write than verse, or (as a seventeen-thousand-line poem goes to show) that much less concise. Yet I persist in seeing it as a mildly nightmarish medium, to which there is no end: coterminous with one's very life, and only at rare and irregular intervals affording that least pause in flight whereby a given line of poetry creates the desire for another, and renews through all-but-whimsical closure the musical attack.

Of course his tongue is firmly in cheek. This reluctant dabbler in a nightmarish medium produced the nearly 700 pages of prose collected in this sumptuous volume. The all-but-whimsical note is struck early and often. But it's irresistible stuff for the most part, including the complete text of Merrill's 1993 memoir A Different Person. It was there that I came across his comments about translating Montale's "Nuove Stanze," a youthful effort that nearly drove the memoirist around the bend. Merrill is wonderfully frank about the inherent confusion of translation. The signal-to-noise ratio isn't such a problem when you're translating, say, the operating instructions for a lawn mower. But all poets traffic in ambiguity. And a poet like Montale--a Hermeticist in spite of himself, even when he was flagrantly kicking Hitler down the stairs in "Primavera hitleriana"--is more ambiguous than most. Here's Merrill, tearing his hair out:

Montale was clearly taking pains not to say all he knew, and to say what he did know with such mysterious force that any reader except for that ideal tu--the woman pondering the chessboard--would have an awed sense of eavesdropping upon a prayer. A wraith of tightly knit logic--a syntax to be followed at your own risk, for the thread might snap at any turning--marked even the least of Montale's poems, any one of which called for as much constructive guesswork as did an ode by Horace... For me it was the ladles and love letters, the furniture and pets, those blessedly ordinary nouns embedded like votive prayers in its walls, that drew a reader ever deeper into the labyrinth. Their translator had to go a step further and pretend to know what dwelt at its heart.

Notice he says pretend: bold, and also honest. And notice that Merrill's own prose has at least some of the labyrinthine quality he attributes to Montale. The playfulness, wrought-iron elegance, and sweet tooth for metaphor all point to the usual suspect: Proust. Yet this frilliness is intolerable to some readers. Back in 1986, when the National Book Critics Circle used to publish its deliberations, one judge compared Merrill's prose to "knitting doilies." Presumably that year's winner (Joseph Brodsky's eminently deserving Less Than One) had a more manly vibe to it. In any case, these are the sort of comments that might best stay behind closed doors.

Which brings us to Marianne Wiggins's recent piece on judging the National Book Awards. Wiggins makes no bones about about the logrolling and special pleading that factor into any such competition. Yet I was disconcerted to learn that although four out of the five judges found Mark Danielewski's Only Revolutions unfathomable (I believe that means unreadable), they chose it as a finalist to placate the single diehard Danielewskiite on the panel. Even worse, they deep-sixed at least one superb novel, Peter Behrens's The Law of Dreams, in the name of diversity. I don't know who should feel worse: Behrens, taking the hit for white males everywhere, or Dana Spiotta, added to the slate simply because she was a bonafide female. In the end Richard Powers, who Wiggins calls her "hair-on-fire favorite," walked off with the prize. Guys rule! (For more discussion of Wiggins and her wagging tongue, see the excellent NBCC blog.)

Finally, here's a piece from Booklist about my novel, The Only News I Know. Molly McQuade did an excellent job of capturing my (apparently) insane level of diffidence--I sound like a walking, talking marshmallow--and even found room for a cameo shot of Al. Now all I need to do is revise the damn manuscript. And take some sort of assertiveness workshop at the Learning Annex.

Comments:
Great that "The Only News I Know" is getting prenatal exposure (even if the piece on it is spoiler-ridden! laugh)...it's a great book in a strong, fresh and unusually nuanced voice. Soon you'll be deciding on the cover art, narrating the audio book, hiring Mr. Wylie and mundane stuff like that...

I had to take the cover off my copy of Merrill's Collected Poems - it was the face staring out from the spine.

I see your point. You might want to put it on the shelf adjacent to such spinal crackers as The Complete Works of Isaac Babel and that humongo edition of The Man Without Qualities. And now that I think of it, both volumes of Gore Vidal's memoirs feature the author's pensive mug.

Hi there, I just stumbled across your blog, and imagine my delight to find James Merrill's lovely book staring at me! (I think the spines are inspired.)

I just can't see Merrill as frilly - I know people do say this, and they also say "arch" - but I think he captures quite important and hidden things, like James - or indeed Proust. Think of "Charles on Fire." And bits od Sandover are intensely moving, no matter what one may say about the project as a whole.