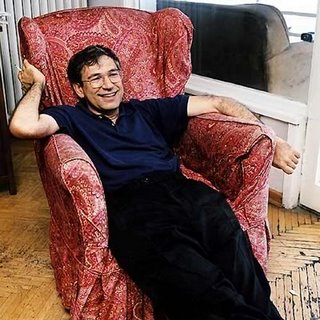 I've blogged about Orhan Pamuk on several earlier occasions (including here and here), and was delighted by the news from the Swedish Academy. To be honest, I thought he still might be considered too wet behind the ears, and was putting my own bet on Adonis, mostly for geopolitical reasons. But I was wrong. In any case, the Los Angeles Times asked me to write an appreciation, which they ran this morning. I began this way:

Back in April, when Salman Rushdie introduced Orhan Pamuk to a rapt audience at New York's Cooper Union, he joked about his Turkish colleague's growing stash of prizes. "Orhan is the winner of the heaviest award in the world," Rushdie noted, alluding to Ireland's IMPAC. "You can kill somebody with it." The crowd chuckled appreciatively. But now Pamuk has won an even weightier honor: the Nobel Prize.

Pamuk, who is currently a visiting fellow at Columbia University, has long been mentioned as a Nobel contender. Indeed, the oddsmakers at Ladbrokes in Britain initially tipped him as a 7-to-1 favorite--no mean accomplishment for a writer whose work hadn't even appeared in English until 1991.

Some, to be sure, considered the 54-year-old Pamuk too young for an award that is customarily the capstone of a distinguished career. And his legal travails with the Turkish government--which tried him earlier this year for "insulting Turkishness" before dropping the charges--amounted to something of a wild card. The Swedish Academy likes to be seen as aesthetically fastidious, unwilling to wade into the political muck. Yet it did give the nod last year to Harold Pinter (a vocal critic of his native Britain) and, in 2004, to Elfriede Jelinek (a vocal critic of her native Austria), so Pamuk's recent history of dissent probably didn't hurt.

You can read the rest here. Me, I'm going to dip into Maureen Freely's revised translation of The Black Book, which I bought in paperback on Thursday. While the young, bearded clerk at Borders rang up my purchase, I said, "You must be selling plenty of these." He glanced at the book and said,"I don't think so. Why?" Drat.

Comments:
Oh, I hate that...when the staff at bookstores are so ignorant.