A week ago Sunday I got lost in Cihangir, an Istanbul neighborhood of windy little streets and cul-de-sacs sloping down toward the Bosphorus. The hour was early. There were many cats in the street but few people, and even the cats, staking out their spots in the shade, seemed to be sleeping in. I knew I couldn't be far from the main drag on Istiklal Caddesi. Yet the morning heat and the crazy-quilt topography kept throwing me off course. I passed certain landmarks several times--a vertiginous staircase, a small-to-medium size mosque with the usual loudspeakers mounted at the top of the minaret--and wondered at one point whether I would spend the rest of my life in Cihangir. 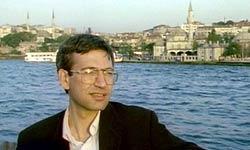 As it happens, that's where Orhan Pamuk has spent much of his life, and where he wrote Istanbul: Memories and the City, which I began reading shortly after my floundering visit to his neighborhood. I haven't finished it yet. What strikes me so far is the pervasive sense of melancholy, which the Turks call hüzün. Pamuk is careful to differentiate this emotion from the solitary blackness described by, say, Robert Burton. Hüzün is a communal feeling--an equal-opportunity brand of desolation--shared by all Istanbullus, living as they do amid the wreckage of a great past. The double-decker ruins of the Byzantine and Ottoman empires, he writes, "are reminders that the present city is so poor and confused that it can never again dream of rising to its former heights of wealth, power, and culture. It is no more possible to take pride in these neglected dwellings, which dirt, dust, and mud have blended into their surroundings, than it is to rejoice in the beautiful old wooden houses that as a child I watched burn down one by one."

Nobody likes the post-imperial blahs, of course. The mighty, having fallen, are apt to be peevishly nostalgic. But after reading a couple of hundred pages, you begin to wonder whether Pamuk isn't seeing the city through hüzün-colored spectacles and projecting his personal sense of woe onto everything in sight. At one point during the trip I encountered an American woman who had lived in Istanbul during the late 1950s and early 1960s: the exact period Pamuk describes in the first half of his book. She had read not only parts of Istanbul but some of Pamuk's fictional output (she mentioned Snow), and found his morose portrait of the city almost unrecognizable. No doubt the author would reply that hüzün is an indigenous emotion, not something to be glommed onto by a Western visitor. Still, when Pamuk writes about Resat Ekram Kocu, author of the Istanbul Encyclopedia (which sounds like a vaguely homoerotic variation on Ripley's Believe It Or Not), he seems to acknowledge that sorrow might be a personal matter after all: "I'm left feeling that Kocu's sadness is less the result of the fall of the Ottoman Empire and the decline of Istanbul than of his own shadowy childhood in those yalis and kösks." Well, I'll keep reading.

Next: I share many of Ron Rosenbaum's enthusiasms. (Three cheers for Charles Portis!) I admire his smarts and polemical zeal. But he seems to have gone temporarily off the rails in his latest New York Observer piece, where he begins by disclosing a link between the opening of Nabokov's Pale Fire and a fairly obscure poem by Robert Frost. No problem there--especially since the brilliant Brian Boyd has signed off on this bit of textual sleuthing. It's all downhill from there, though. The long poem at the heart of Pale Fire, Rosenbaum argues,

is one of the most underrated American poems of the past century.... Some have mistakenly called it a parody; some have shown that it demonstrates the justness of [fictional poet John] Shade's self-deprecatory characterization of himself as an 'oozy footstep' behind Frost. In fact, taken on its own, it surpasses in every respect anything that Frost has ever done. Deal with it, Frostians.

It takes an ear of the purest tin--a kind of metallurgical wonder--to make these assertions. Nabokov was a great novelist but a minor poet. The diction of "Pale Fire" dips into poetic flabbiness with the very second line ("false azure" indeed), and while there are passages of tremendous beauty and cutting wit, VN just isn't in the same ballpark as top-drawer Frost. No comparison. Deal with it, Nabokovians.

Finally, I've been listening to the lavish two-disc delight that is Sam Cooke's SAR Records Story 1959-1965. SAR was Cooke's own label, a hothouse-cum-laboratory where he reigned as producer, songwriter, and impresario. The first disc is gospel (which the canny Cooke kept nudging toward pop), the second disc is pop (which he tried to infuse with at least a hint of gospel ardor), and there's plenty of wheat amidst the chaff. Hell, even the chaff is pretty damn great. You get the Soul Stirrers--with Paul Foster, Jimmie Outler, and Johnnie Taylor all laboring mightily to fill the departed Cooke's shoes--and R.H. Harris and three excellent cuts by the youthful Womack Brothers. Note their stirring version of "Somewhere There's A God," with Curtis Womack pulling out all the stops. Then, on the pop side, note the quasi-identical "Somewhere There's A Girl," sung by Cooke himself--talk about turning on a secular dime! All this plus the Simms Twins, the Valentinos (as the Womack Brothers were quick to christen themselves when they went pop), and a throwaway instrumental by Billy Preston, who must have still been in short pants at the time.