Last year I translated most of Saul Steinberg's Letters to Aldo Buzzi, an epistolary treasure trove covering the years from 1945 to 1999. Steinberg met Buzzi during the 1930s in Milan, where they were both attending architecture school. Neither went on to become an architect. Steinberg, a Romanian Jew, fled Milan in the face of Italy's increasingly suffocating "racial laws," briefly cooled his heels in Santo Domingo, then made landfall in the United States in 1942. Buzzi, meanwhile, embarked on a long career as jack-of-all-trades: editor, screenwriter, publisher, and author (of such Epicurean productions as Journey to the Land of the Flies and The Perfect Egg.) The Letters, originally published in Italian by Adelphi, and only after much agonized hesitation by Steinberg, are a one-sided affair--ie, no letters from Buzzi. This seems like a shame. Perhaps at some point this wonderful writer (he's the one on the right, looking very glamorous and Italianate) will allow a culling of his own letters to see print. Meanwhile, the book is a treat. Also, the most intimate glimpse we'll ever get of the enigmatic artist, who will be the subject of a major show at the Morgan Library in 2006. 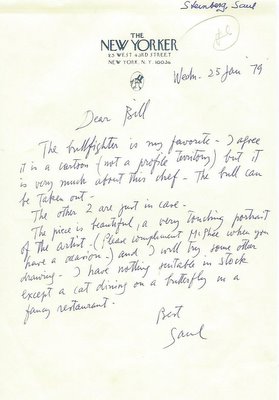 Anyway, I mention all this by way of crowing over a purchase I made on eBay: a short letter from Steinberg to William Shawn. I came across the listing almost by chance, and after a mild-mannered bidding war, got the piece for a song. As you can see here, Steinberg is discussing potential art for a New Yorker article. If I weren't so intimidated by my copy of The Complete New Yorker--so far I'm too overwhelmed even to remove the shrinkwrap--I would do some quick investigation and figure out which article in particular. (Well, there's always tomorrow.) In the meantime, I'm studying the artist's handwriting, the upward slant of the sentences and the distinctive S. I'm also wondering how this letter--uncreased, so I assume it traveled by interoffice mail--escaped the New Yorker archives and slithered into the private sector. Perhaps it was discarded. Or never sent. I don't like to make a fetish out of these things, but I admit I'm delighted to own it.

SPECIAL UPDATE: Sheila Schwartz at the Saul Steinberg Foundation was nice enough to run down the reference in Steinberg's letter. He was referring to John McPhee's profile of a nameless, superlative chef, "Brigade de Cuisine," which ran in the February 19, 1979 issue of The New Yorker. Ye gods, I recall reading the original article in the library at Wesleyan. It was subsequently reprinted in Giving Good Weight.