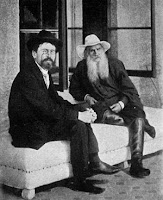 I'm immersed in NBCC reading, but every now and then this cheating heart picks up a non-NBCC title for some spiritual refreshment. This morning it was Elif Batuman's The Possessed: Adventures with Russian Books and the People Who Read Them, which looks right up my alley (maybe in March). I was relishing a passage about Tolstoy and Chekhov, the two mighty poles of Russian letters, roughly representing wild-eyed spirit and unflappable matter, when I came across this gem:

The last meetings between Tolstoy and Chekhov took place in Yalta, where Chekhov had gone to die. One day in Yalta, Tolstoy put his arm around Chehkov. "My dear friend, I beg of you," he said, "do stop writing plays!" Another time, when the two writers were gazing at the sea, Tolstoy demanded, "Were you very profligate in your youth?" Chekhov was speechless with embarrassment. Tolstoy, glaring out at the horizon, announced, "I was insatiable!"

A little more on Salinger

I'm not actually a Salinger obsessive and don't have much to add to my previous post. However, the New Yorker round-robin of Salinger pieces did include this very interesting paragraph, in Lillian Ross's brief remembrance:

At one point during the more than half century of our friendship, J.D. Salinger told me he had an idea that someday, when "all the fiction had run out," he might try to do something straight, "really factual, formally distinguishing myself from the Glass boys and Holden Caulfield and the other first-person narrators I've used." It might be readable, maybe funny, he said, and "not just smell like a regular autobiography." That main thing was that he would use straight facts and "thereby put off or stymie one or two vultures--freelancers or English-department scavengers--who might come around and bother the children and the family before the body is even cold."

It's a tantalizing thought: Salinger Unplugged, with all the deflector shields down and the inconvenient facts to wrestle with. Of course it's possible that this very manuscript exists, stowed down in the bombproof vault with the hundreds of unpublished stories and the author's own, proprietary sequel to Catcher in the Rye, in which the middle-aged hero teaches English and Industrial Arts at a Connecticut high school. I hope it does.

When you think of it, Salinger's recipe isn't so different from what Philip Roth dreamed up for The Facts. The problem in that case was that Roth (for whom the fiction had at least temporarily run out) couldn't quite find the right tone. His sworn testimony sounded oddly sedated--only Zuckerman's acerbic afterword got the electricity flowing again, meanwhile muddying the very waters this "factual" account was supposed to clarify.

Finally: for an interesting take on Salinger's work (and Spike Milligan's) as a reaction to post-WWII shell shock, stop by Baroque in Hackney.