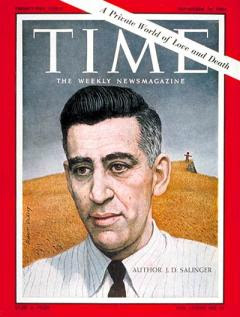 Comments:
I was sadden to hear the loss of J.D. Salinger. He will be missed, but he will surely live on in his works of literary genius.

Thanks for stopping by, Jenna, and yes, I'm sure that Salinger's books will ensure him a lengthy afterlife.

Hey, wow James! I wrote a very hurried little post on my way out the door about ten seconds after hearing the news; meant to come back to it with something more interesting, but then of course didn't. Think I'll just link to you, as usual.

At one stage I had a proof copy of Ian Hamilton's biography of Salinger, the one that was blocked from publication until some offending bit had been taken out... this was probably about 23 years ago. (Feck.) Unfortunately at some point, me being married to a secondhand book dealer at the time, I must have decided I was bored of it and the money would come in more handy, because I no longer have it. About once a month lately I remember this and curse that easy access to second-hand cash.

Hope you're well, your recent travels sound a little too exciting for me to read about in full... xx

Greetings, Ms. B! I love that Ian Hamilton book--it's the best frustrated biographer's tale ever. But as I recall, it wasn't just an offending bit he was forced to remove. Salinger's legal team obliged Hamilton to remove almost all quotations from his (Salinger's letters). He had to go back into the book at the galley stage and paraphrase every last word. Poor guy.

Ohhh, hmm. I thought it was one letter. But for it to be lots makes sense too - JDS would hardly have been satisfied with less... and btw you should really, if you can get your hands on it, read Hamilton's Collected Poems. A slim but extremely elegant volume.