In my never-ending battle with the torrent of books, I was about to take the major step a few days ago of throwing out a galley: Letters of Ted Hughes. I've got the finished book, and disposing of the galley would free up a few extra inches of floor space in my office. Alas, I started skimming: mistake. First I came across this, from a 1961 letter to the newly married Daniel Weissbort: "Marriage is a nest of small scorpions, but it kills the big dragons. I'm an advocate, so have nothing but congratulations & good wishes, my very best wishes, for both of you." Hmmm. With advocates like these.... On the opposite page, he's trying to make up with Leonard Baskin, who illustrated many of his books. (Which reminds me, I recently declined to throw away a copy of Baskin's Figures of Dead Men, which had been sitting in my old bedroom at my parents' house since 1978. Oh boy.) Anyway, Baskin, who's seen here with the poet, clearly had a rocky visit to the Hughes-Plath menage: 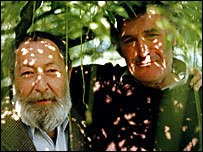 Ever since you went I've been wondering if you'd write, since that last day was unpleasant for us too. If you're still curious to know the cause--or what was probably the main cause--it was that Sylvia hadn't been able to do any work all week in the middle of her first longish work which had been going like gunpowder up to that point, and she was upset at the same time at taking no part in your visit except to cook and so on. So your sharp remarks to her on that Friday hit her with a special irony.

Just a little later in the same letter, Hughes explains that he and Plath have fled the literary life in London (which he elsewhere defines as "a chance juxtaposition of individuals who wish to be known as 'writers' held in a semblance of community by the watchfulness of their mutual envy and malice.") Where they have fled to is a property in Devon. Yes, the two poets have pooled their resources and bought

a house with 6 bedrooms, a stable with 3 stalls, a spare 2 room cottage, a big vegetable garden, an extensive orchard and 2 1/2 acres of land. Also a thatched roof. It's an old farm--part of it 11th Century. There's a prehistoric tumulus or fort-mound in the orchard. It's a knock-out. We're having the owner clear out the population of woodworm and death-watch beetles before we move in, this weekend.

I know, I know, the place was probably tumbling down, and the insect population had been breeding in the beams for the last millennium. Still, it sounds like quite a retreat, doesn't it? They even got a tumulus at no extra charge. The description made me envious, as it must every New Yorker, grateful for every miserable square foot of living space. It also made me ponder my own dream house, which is not nearly so extensive. It seems to be located in a pine grove, simply because I like the smell of pines and the springy feeling of walking on the fallen needles. No stable. An orchard would be nice--pears and apples--as would a flat grassy area in back, cleared of deer ticks and other pests by the Army Corps of Engineers. I could write sestinas at the kitchen table. The living room, the biggest in the house, would be rustic but also modern and comfortable, like the interior of Davy Crockett's cabin with high-speed Internet access. I sound like I'm joking, but I'm not. Outside at night I would be spared the shouting and high-decibel flirtation from the singles bars out on Second Avenue. Just quiet, and velvety darkness, and a solid complement of stars on cloudless nights, which I could study with a Sears and Roebuck telescope on the front porch. I could go on.

Comments:
"Marriage is a nest of small scorpions, but it kills the big dragons." This is perfect. More than perfect.

Thank you from the bottom of my sometimes ruefully but in it for a lifetime married heart.

You're very welcome. Of course Ted Hughes gets the credit, not me. And sadly, his own marriage to Sylvia Plath did not kill all the big dragons. Incidentally, I enjoyed your post on Venice!