Certain writers are easy to characterize. They're quotable. What they do, they do in every paragraph, every phrase--you could clone the entire novel from a stray syllable. Others are more elusive. Their quicksilver charms make it hard to pin them down, and to get the real flavor of the novel, you have no choice but to read the whole thing. No substitutions accepted. Anyway, Lore Segal belongs to the second group. On at least one prior occasion I've written about her work--the fluid, funny, heartbreaking Shakespeare's Kitchen--and am now reading Lucinella, an earlier novella that Melville House has just reprinted. It's about poetry, parties, herd behavior, sex, and the infinitely fragile human ego. (To write about such things, of course, you must have a sturdier ego than you think.) Here's a bit about Zeus, who's just a guy but also a god, at least when you're in love with him: 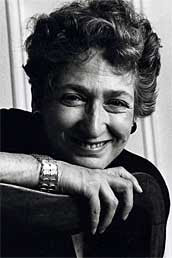 I used to laugh at gods and kings. I'd imagined Zeus muscle-bound, stupid with power, rattling his enormous thunder, unable to control the whims and spectacular tempers of his oversized relations, but in my bed his mind moves feelingly. It's just that mine, being Jewish and from New York, leaps more nimbly, which he enjoys. I sense his smiling in the darkness. When I get silly he reaches out laughingly to fetch me home to good sense and we make love again, sleep awhile, and more love and more talking.

More love, more talking: maybe that was Segal's original title. The narrator is happy and in a hurry to convey her happiness, hence the missing verb in the last clause. Who needs it? But two pages later she's less happy, anticipating the end, making a clumsy stab at defensive irony, which never works when you need it most:

I'm crying for the day when Zeus will not be holding me like this, or will be holding me like this while I am scheming to inch myself out of the constriction of his arms. He doesn't ask me what's the matter. Think of all the women, mortal and the others, who've wept in Zeus's arms and he perhaps, when he was young, in theirs. He strokes my hair and keeps holding me. My tears grow cozy. For sophistication's sake I'll tell you the nature of ardor is to cool, but I can't believe it.

Aside from the sheer, elliptical speed of her narratives--Segal simply leaves out whatever isn't interesting--her brand of irony may be the most distinctive thing about her work. Her nimble, Jewish, New York-by-way-of-Vienna mind inclines her toward gentle mockery. Yet her ardor is genuine: she treats love as fact, not delusional fiction, and three cheers for that.

This is all by way of saying that I'll be chatting with Lore Segal this coming Monday night at McNally Jackson Books in Soho. Well, mostly she'll be reading and taking questions from the audience, but in the brief interlude between those activities, I'll be asking her about Lucinella and other more general matters. More details here. Come one, come all--not for my questions, but for her answers!

Are you planning to post a transcript of your conversation with Segal? Please do—if at all possible. She is an amazing novelist. If you haven’t read Her First American, about a German Jewish refugee’s adjustment to America, you really should. It is unerring and hilarious.

I enjoy you the chance to talk to her!

What a terrific slip. I envy your chance to talk with you.

Ach. I give up. You see the effect Lore Segal has on her loyal readers.

I agree, she is an amazing writer, and I'm delighted to be chatting with her. I don't know if anybody will be taping the entire interview--maybe I can scare up a tape recorder. But at the very least, I hope to post a video clip or two.