I just read about the death of guitar god and hi-fi wizard Les Paul. He was 94, and passed away due to complications of pneumonia. Another giant shuffles offstage! In October of last year, after decades of thumb-twiddling delay, I finally caught one of Paul's Monday night shows at Iridium. I had waited so long because once an artist achieves that sort of Great Sequoia status, you assume he or she will be around forever, benignly crowding out the second-growth artists below. Not true! 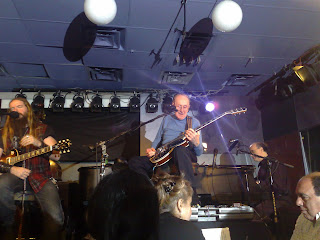 Anyway, Paul was in fine form that night. The lights went down, and you could just barely make out his handlers assisting the arthritic leader onstage. The camera flashes started popping. And Paul, still seated in the dark with his iconic guitar propped in his lap, exclaimed, "I feel like Ray Charles up here!" That was a pretty good index of his wisecracking repartee--a key element of his performance. (At one point, noting that he sometimes employed a female bassist, he identified that configuration as the "Less Balls Quartet." Rim shot!) And what about the actual playing? Arthritis and old age had slowed him, of course. His youthful, sometimes prolix style had to be simplified, like it or not. But his tone--that bright, gleaming sound with its dollop of reverb, still strangely redolent of the Fifties, the era of spit curls and Sputniks--was intact. And when he led the band through a revved-up "Tennessee Waltz" at the end, his squiggly licks seemed to shoot around the room like Roman candles. Equally touching was his role as universal mentor. At one point heavy-metal shredder Zakk Wylde wandered onstage and belted out some Ralph-Cramden-inflected blues with the master. Wylde's music isn't especially to my taste, but his hero-worshipping attitude was completely winning. There was also a cameo from the suave jazz player Eric Johnson, who was no less in Paul's thrall. As were we all. (More on this subject later. For now, you can read the New York Times obituary here.)