Last week I posted a few thoughts about the white-hot battle for the Oxford professorship in poetry. In a nutshell, I felt that Derek Walcott's accomplishment as a poet easily qualified him for the gig, despite his unsavory history of hitting on female students. It wasn't as if Oxford were hiring him to teach--the professorship is an honorary position, with a small stipend and few duties beyond a handful of lectures. I think that is still a defensible position. Yet I was also too cavalier about Walcott's skirt-chasing, and Seth Abramson at Suburban Ecstasies took me to task for that. For perhaps the first time in my life, I had become the poster boy for retrograde male chauvinism. There ensued an exchange of views in the comment thread, and rather than endlessly rephrasing, I'll just post some of the salient bits: 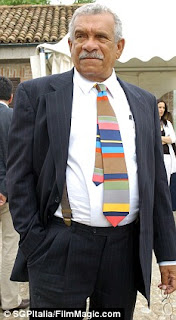 JM: As the author of that sick defense (I'll omit the quotation marks around both words), I thought I would put in my two cents here. In the very same blog post you quote, I said that if Walcott had truly blackmailed students into sleeping with him, he should have been kicked to the curb back in the 1980s. What to do about his rotten behavior twenty or thirty years after the fact is a little more complicated. As for admiration turning into intimacy, I wasn't blaming his female students (although I can see why it might have appeared that way). I was speaking more generally about Walcott coveting Robert Lowell's tie, or me coveting Richard Ford's fork. I don't in any way endorse sexual harassment. I consider it a great relief that the fuzzy rules governing such conduct, which allowed Walcott a free pass twenty-five years ago, have gotten much tighter.

SA: I'm glad you mentioned Walcott deserving the employment axe in the 1980s, though in saying "to be fair, he was hardly the only poet to take advantage of his harem of youthful admirers," I'm not sure I see the relevance--it's not about fairness to Walcott, but the students, and every single professor who "took advantage of his harem" needed to be axed, period. If Walcott had been the only one caught, then Walcott should have gone, and that would have been fair. If twenty professors had been caught, then twenty should have been axed, and that would have been fair. Each act would have an inherent fairness not diminished by any failure to root out additional violators.

Had Walcott apologized publicly and amended his behavior, twenty or thirty years might change this story somewhat. But there's been no apology, and no particular reason to think the behavior's been amended, either, so Walcott is (it seems to me) as deserving of censure now as ever--he's done nothing to heal the wounds he caused or to rehabilitate himself.

As for Lowell and Ford, my feeling is that poets are just people--typically more flawed than most, and less giving of themselves than most (because poetry engenders its own sort of egotism), and therefore hardly worthy of any sort of blind admiration. I'm certain I've met several hundred men in my life who are greater men than Walcott, and none of them were famous.

JM: As for my comment about the long, pathetic practice of American poets sleeping with their students--I wasn't trying exonerate Walcott. I was only suggesting that the laxity applied to his case in the 1980s may have stemmed in part from the sense that this was going on all over. (And yes, from the fact that he was a celebrated black poet and likely Nobel laureate.)

If Walcott had apologized or made some public show of contrition, that indeed would have changed matters (somewhat, anyway). Since he didn't--and since he was still making like a lounge lizard as recently as 1998--I should amend my earlier blog post and concede that he's probably not the right guy for the Oxford job. To hire him would send a bad, destructive message. Meanwhile, here's another question: in fifty years, would you rather read the great poetry of an asshole or the capable poetry of a really good person? The answer sticks in my craw. It doesn't persuade me that Walcott should get the Oxford professorship.

Finally, Lowell's tie and Ford's fork. I don't consider poets to be better or less fallible than other people. There are many shining examples of cruel, selfish, and manipulative poets. But we could probably find similar percentages among garbage men and paleontologists. So, no blind admiration, just a human (and humorous) itch to borrow a little magic from your hero. That's why I took Ford's fork (although he's not my hero) and that's why I considered stealing a plum from the tree in front of Keats' house in Hampstead (although it wasn't the original tree).

I have no reason to doubt Abramson's claim that he's up to his neck in great men. I would also suggest that he's confusing different sorts of greatness. We don't admire (or even worship) poets for their strength of character, but for their demonic negotiation of language and experience--which, as Abramson concedes, is often at odds with their scuzzy day-to-day behavior. That said, I did come around to his point of view. In other words, I think that Walcott's history of sexual harassment does make him a less-than-attractive candidate for the professorship.

Meanwhile, according to the Times Online, Walcott's history as a "sex pest" is now being anonymously circulated to potential voters:

The race to win poetry's most prestigious academic post has turned dirty after Oxford academics were anonymously sent a lurid dossier accusing Derek Walcott, the front runner and Nobel laureate, of being a sex pest. The package was circulated last week to staff and graduates eligible to vote in next Saturday's election for the Oxford professorship of poetry, as well as to the offices of Cherwell, a student newspaper.

Straight out of The Human Stain, isn't it? Further down, the Times article includes some extra detail about the anonymous dossier:

About 50-100 electors, including dons and heads of colleges, have been sent the Walcott dossier, posted from London. The only clue to the sender’s identity came in a note with Cherwell’s package. It was signed "Sandra and Jane."

The envelopes contain photocopied pages from an obscure academic work, The Lecherous Professor, which detail Walcott's attempts to lure the Harvard student into bed.

The Daily Mail quotes Hermione Lee, who has been one of Walcott's most prominent supporters (and is also a professor at Oxford). She has a starchy reaction to the poison-pen maneuvering behind the dossier ("an unpleasant way of carrying on") and goes on to reiterate many of the same arguments I initially made. "Should great poets who behave badly be locked away from social interaction?" she asks. "We are acting as purveyors of poetry, not of chastity." Addressing Cherwell, the eminent biographer of Edith Wharton (certainly not chaste) and Philip Roth (even less so) also compared Walcott to some of his randy predecessors: "You might ask yourself as a student body whether you wanted Byron or Shelley as a professor of poetry, neither of whom had personal lives free from criticism."

UPDATE: According to the Guardian, Walcott has withdrawn from the race. "I am disappointed that such low tactics have been used in this election and I do not want to get into a race for a post where it causes embarrassment to those who have chosen to support me for the role or to myself," he told the Evening Standard. "I already have a great many work commitments and while I was happy to be put forward for the post, if it has degenerated into a low and degrading attempt at character assassination, I do not want to be part of it."

Comments:
You're a trouble maker as usual Mr. Marcus

Hey James - well, this isn't your fault, is it! I weighed in over at Seth's thing, but of course was weighing my words so carefully that I think I came out saying nothing.

Oddly enough, I found the detailed comment from 'anonymous' the most compelling argument - the analysis of the woman-free notion of greatness, etc.

The very sad thing is that the "smear" (I use scare quotes here in light of Seth's questions about the word) campaign is also harassment. Walcott may have been known for his threats of reprisal, but surely the campaign was orchestrated by people NOT his students - so what did they have to lose, that they had to resort to anynomous harassment?

It was an unprofessional way to oust someone from a distinguished position.

And really, focusing on the sex rather than the bullying does the women students no favours.

And Ms. B, delightful to see you as well. I read your comment over on Seth Abramson's blog and thought it was quite blunt. You're right, this isn't about an occasional moment of poor, post-eggnog judgment at a holiday party; it's not about sex. It's about a long history of petulant, manipulative, touch-my-tumescence shabbiness. It doesn't vitiate the brilliance of Walcott's poetry (much of it, anyway), but you can still question whether you want the guy around as a nominal professor. As for the "smear" campaign--it's a misnomer, as many others have pointed out, since the information in it was verifiable and on public record--but the anonymity has its own special brand of tawdriness.

On the other hand (and I know I'm coming late to this thread!), are we pretending that in the bigtime world of "professional" poetry, students, protégés and "muses" of both genders haven't, since publishing began, gotten their legs up and into real careers (some famous) by doing what Walcott sometimes tries to get his students to do?

I know a woman who ended up on the Today Show, promoting a bestseller; she started off as a poet and entered the bigtime by (sorry) letting the bigtime enter her (I won't name names here but can in private! wink). It's hardly uncommon. And it's not a feminist issue, or a gender problem, because it happens in all directions. A crackdown will result in a dearth of photo-ready public poets: you mark my words! Laugh