Meaning is what we arrive at after the fact--an obsessive glance in the rear-view mirror. Or so I would argue. Jung felt differently, and loved to cite a favorite line from Through the Looking-Glass: "It's a poor sort of memory that only works backwards." I am inclined to wonder when I come across two stories like these on the same day. First, from Der Spiegel:

Last July, just minutes after a branch of Madame Tussaud's opened in the German capital, a 41-year-old former policeman leaped over the table at which [Adolf] Hitler was sitting. He shouted "No more war!" and beheaded the doll by twisting its beeswax head from its fiberglass body. The left hand of the figure, worth around $274,000 in total, also broke off.

Police briefly detained the man, known only as Frank L., on suspicion of damaging property and causing injury--he lightly wounded one of the two security guards who tried to stop him--and he was eventually fined $2,423. The ex-policeman said he found it inappropriate to display an exhibit showing the Nazi leader only some 500 meters from Berlin’s Holocaust memorial. 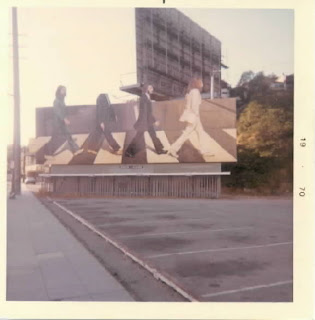 Someone has beheaded a statue of President James Garfield that was installed last week at an Ohio college. Hiram College spokesman Shawn Brown says the vandalism was discovered Friday morning, just a day after the sandstone statue was dedicated on the campus in Hiram, 30 miles southeast of Cleveland. Brown says the college is hoping the head will be recovered so the 95-year-old statue can be restored, but police have no leads in their investigation.

Okay, one is a political statement (a misguided one, in my opinion), and the other sounds like a frat-boy prank (unless it was a principled shot at the Crédit Mobilier scandal). Still, the human brain, if it happens to be mine, struggles to draw some poetic lesson from these distant decapitations. And let's not omit a third example, which took place back in 1969, when Abbey Road was released in the United States. Capitol put up a promotional billboard in Los Angeles, and soon after Paul McCartney's head went missing. I like the photo above for its washed-out quality and Polaroid pigments; I relish the sunlight on the scrubby vegetation and the date in the right margin. If I'm remembering correctly, Macca's head turned up some teenager's bedroom. Garfield's is still missing. Mine, whose innards resemble a perpetually agitated snow globe, is still attached.

Comments:
I reckon Garfield's hanging out with the LSE penguin. Perhaps someone was misled by the surname.