The latest installment of NBCC Reads, which is all about works in translation, has now been posted over at Critical Mass. It entailed boiling down about 9,000 words of copy into a dapper post a third of that size--and I admit I like the carpentry involved in such a task. I crammed as many of the responses as I could in there. The rest will appear on Critical Mass as freestanding Long Tail posts, and there are definitely some treats to come. Here's an example (in which very few of the words are mine): 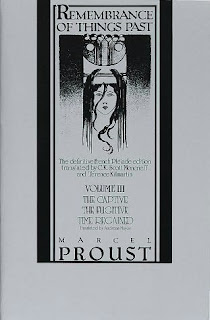 Then there was that Everest of French letters, whose vertiginous heights and winding descents have bested many a translator: Marcel Proust's In Search of Lost Time. Daniel Dyer saw the multi-volume monster as an absolute summit. "I am in my sixties," he said, "and recovering from prostate cancer surgery. I decided it was, well… time. I read 100 pages a day, every day, until I finished the volumes. I think these are the greatest literary works ever written by a human being. I've not read everything, of course--not even everything that's celebrated. But I cannot imagine anything better."

Michael Sims agreed, praising the magic-lantern quality of Proust's imagery and his prodigal, preening cast of characters. "Most of the time," he concedes, "I find the characters maddening--petty, self-absorbed, posturing, judgmental, although of course often hilarious and sometimes tragic. But I don't read for the characters. I read, I think, for the cinematography. Has there ever been such loving attention to the sensualities of the moment? 'It was on the Méséglise way that I first noticed the round shadow that apple trees make on the sunny earth and those silks of impalpable gold which the sunset weaves obliquely under the leaves, and which I saw my father interrupt with his stick without deflecting them.' I quote this almost random selection (from the Lydia Davis translation) as an example of the kind of snapshot imagery that Proust seems to casually exhale without thinking: the glimpse immortalized. So generous is his encyclopedic curiosity, so Olympian his empathy, that even passing shadows have personality."

Please do take a look at the entire omnium gatherum here. And stop by Critical Mass over the next month for the dessert course.