My last post, really, on the Battle of the Bards

My friend Katy Evans-Bush published a piece in the Guardian a few days ago about the Walcott Affair, in which she quoted my earlier (and jocular) remark about the Nobel laureate chasing his female students around the coffee table. One anonymous reader in the comment thread alluded to my "locker-room inanities." That aside, I figured the whole fuss was over and I would never utter another syllable about it. But now I see that Ruth Padel, who was elected to the post after Walcott withdrew, has herself resigned. According to the Guardian (again): 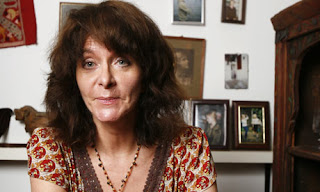 Padel won the vote nine days ago. But in a statement tonight she said: "I genuinely believe that I did nothing intentional that led to Derek Walcott's withdrawal from the election. I wish he had not pulled out. I did not engage in a smear campaign against him, but, as a result of student concern, I naively--and with hindsight unwisely--passed on to two journalists, whom I believed to be covering the whole election responsibly, information that was already in the public domain."

She said she had acted in "good faith" and would have been "happy to lose to Derek, but I can see that people might interpret my actions otherwise. I wish to do what is best for the university and I understand that opinion there is divided. I therefore resign from the chair of poetry."

In subsequent remarks made earlier today at the Hay Festival, Padel suggested she may have been the victim of a Machiavellian conspiracy. She was meanwhile "trailed by security guards, a measure usually reserved for ex-presidents and pop stars. An event that she chaired this afternoon--a conversation with Emma Darwin, on the latter's latest novel--was monitored by four stewards, a press officer and two guards." I find the Praetorian Guard routine a little weird. What I find even weirder is the idea of a poet having a campaign manager for the Oxford post.

Comments:
Well, Walcott emerges the wiser one. He withdrew, kept silent and let people get on with their presumptions. Padel should then have withdrawn. Instead, she stuck it out a bit, then resigned, then admitted her own hand, now tries to turn it around and suggest it may have been a conspiracy against her (!). The more she speaks, the deeper she digs her own hole. As a poet she should know that the more you speak, the more fodder you provide.

I interviewed Walcott several years ago, and jokingly suggested that the reason poets, because they can't play a musical instrument, become poets is that they want to get women.

Listen to his dignified response:

Thanks to you both for stopping by. Regarding the comment from groundwork: Walcott withdrew because he was understandably sick of hearing the accusations. That doesn't mean the accusations weren't true. Meanwhile Padel stepped in her own pail of milk, having gotten too involved in petty electioneering. Depressing, all of it. Nigel, I'd love to hear Walcott's response to your question, but that URL didn't point to it. Can you supply another?