This morning I cabbed it over to Avery Fisher Hall and attended an open rehearsal by the New York Philharmonic, under the baton of its incoming conductor Alan Gilbert. What a pleasure to stand out in the lobby beforehand, drinking gratis coffee and enjoying the self-selecting company of hundreds of Mahler fiends. When I eased into my tenth-row seat, just a few of the orchestra members were visible: a couple of cellists were practicing bits of the Mahler One. It's strange and touching to see the performers in their street clothes. They seem less heroic, less elevated, more like normal human beings, each of whom happens to be endowed with an extraordinary power: X-Men, X-Women. 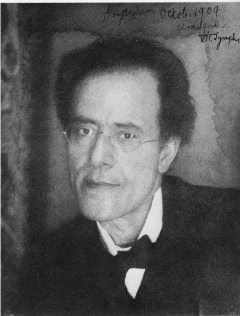 Gradually the entire orchestra trickled onstage, followed by the conductor in a black shirt and dark slacks. Without much preamble, Gilbert cued the A-natural drone that begins the symphony--nearly a minute of pure suspension, with the reeds, brass, and flutes passing around one of those two-note cuckoo calls that should sound like nature kitsch but never do. The trumpets played their fanfare offstage, possibly from a room with a soda machine in it (or so I like to imagine), then quietly snuck into their seats. And off we went. Two or three times I thought the string section--which includes the conductor's mother, Yoke Takebe--was shouted down by rest of the ensemble. I heard a single fluffed note during a brass entrance. Otherwise the performance was a treat, imbued with the sort of ardent precision that would have made Mahler faint with pleasure. It certainly put to shame the agreeable shambles he described in an 1894 letter to Arnold Berliner, when he conducted the piece in Weimar:

I won't go through the performance bar by bar (or beer by beer). I will note Gilbert's supple handling of the third movement, especially that hushed passage smack in the middle, which David Hurwitz (in The Mahler Symphonies: An Owner's Manual) calls "one of those Mahlerian oases of peace, made all the more gripping by appearing in such lurid surroundings." That sounds about right. The effect is like emerging into a clearing after a long trudge through the woods, with diffuse sunlight everywhere and no motion of any kind. So beautiful, and so brief--after a couple of minutes, it's back into the rough, with Frère Jacques and a klezmer band ringing in your ears. 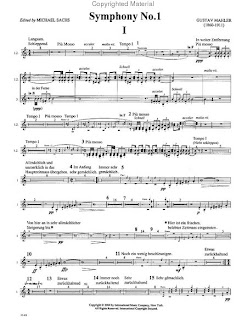 After the intermission, the orchestra played "Blumine," an eight-minute-long pastoral that was originally the second movement of the symphony we had just heard. It's Mahler in a mellow mood, with none of the manic alternation that is his greatest virtue and intermittent vice. What I wanted to dwell on, though, is the fact that after struggling for seven years to incorporate this palate-cleanser into the symphony, he dropped it entirely in 1896. At that point "Blumine" vanished. It didn't resurface until 1959, when the manuscript went up for sale at Sotheby's. It was published as a freestanding piece in 1968, and is occasionally, blasphemously inserted back into the symphony by a renegade conductor. The general feeling is that it extended the bucolic vibe of the first movement for too long, and thereby violated the overall trajectory of the symphony. In other words, its exclusion was logical, even inevitable.

Critics (myself included) love to talk about the inevitability of a work of art. For the most part, that is absolute crap. Art is created by fickle, fallible human beings, who may well make the most momentous decisions about their work on a bad hair day. Mahler is a great example, since he was constantly shuffling movements around, thinning and thickening his orchestrations, trying to turn demi-failure into semi-success. Sure, there is such a thing as formal perfection, to which we listeners respond with a kind of cooing satisfaction. But plenty of the biggest thrills--the moments that give you goosebumps and palpitations and the distinct, almost perverse sense that you are peering directly into another person's consciousness--come when the artist tosses logic out the window. "A work of art is never finished, only abandoned," said Paul Valéry (or Edgar Degas or Leonardo Da Vinci, depending on which unreliable website you consult). I'm hoping it was Da Vinci, since he seemed allergic to finishing anything, including a meal. But it's correct in any case. The only inevitability is that sooner or later, the artist will cry uncle and resolve to do better next time.