Walcott: the chair, the tie, plus Ford's fork

Over at the Independent, John Walsh wonders whether Derek Walcott's long history of skirt-chasing should prevent him from assuming the Oxford professorship in poetry. This isn't your average academic gig: the holder has few duties and a measly salary (£6,901, the equivalent of $10,000 and change). But there are some glorious predecessors, including Matthew Arnold--who inaugurated in the chair in 1865--Robert Graves, and W.H. Auden. The other peculiarity is that the professor is elected by Oxford graduates, instead of being selected by the usual conclave of backstabbing colleagues. In his piece, Walsh handicaps the race, which has narrowed to just two candidates:

[Christopher] Ricks steps down next month, and Oxford graduates are lining up like pompom-waving cheerleaders to vote their favourite candidates into his vacated throne: supporting my old friend Ruth Padel will be the biographer Victoria Glendinning, the philosopher AC Grayling, and Sir Jeremy Isaacs. Against her in this two-horse Parnassian gallop is Derek Walcott, the St Lucia-born poet and 1992 Nobel literature laureate. His fans include Marina Warner, Hermione Lee and the Booker prize-winner Alan Hollinghurst. 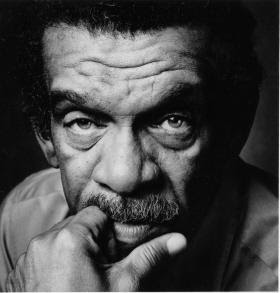 The chair of the English faculty board, Dr Sally Mapstone, has said: "The two candidates... both have excellent credentials for the post, and each has an outstanding record as an ambassador for the subject. It would be a great privilege to have either of them as Oxford's professor of poetry for the next five years."

Have Walcott's fans all forgotten the shadows of sexual harassment allegations that have swirled around their man over the years? Should one not mention Ms Nicole Niemi, 30 years his junior, who came forward in 1995 to claim that, when she was a creative writing graduate student in the 1980s, Walcott threatened to fail her unless she went to bed with him? When she declined, she alleged that he told her the play she'd written for the course couldn't, in that case, be produced. Years after the event, Ms Niemi was looking for half a million dollars in compensation and punitive damages before the claim was eventually settled.

I briefly studied with Derek Walcott during the early 1980s. Being male, hirsute, and non-blond, I didn't have to worry about him hitting on me, and found him an inspiring teacher. But there were always rumors about his dalliances with female students. To be fair, he was hardly the only poet to take advantage of his harem of youthful admirers. And one acquaintance, who apparently declined his physical advances but still fraternized with the future Nobelist during the off hours, conceded that he had a certain "integrity" even when he was chasing you around the coffee table.

Now, if Walcott truly threatened to fail a student unless she slept with him, he should have been kicked out of the university at once. And the Niemi dispute is not an isolated incident. Still, one hopes that a genius would have eventually learned his lesson. The other problem is that in the long run, poetic accomplishment trumps bad behavior. Also: admiration is always itching to turn into intimacy. Walcott himself, early in his career, had a thing for Robert Lowell's ties, as he recounts in What the Twilight Says:

In his apartment, about to go out somewhere with him, I fix the knot of Cal's tie. He returns the knot to its loose tilt. "Casual elegance," he says, his hands too large to be those of a boulevardier. The correction was technical, one moment's revelation of style. His verse, in that period of two close books, Near the Ocean and For the Union Dead, had the casual symmetry of a jacket draped on a chair, genius in shirtsleeves. He had written about the stiffness that paralyzed his metre, how he found its rigidities unbearable to recite, skipping words when he read in public to contract them like asides. He had learned this from Beat poetry and William Carlos Williams. Still, his free verse was not a tieless metre....

On another occasion, and the reader must not think that I have a fetish about poets' ties, I admired, with casualness, a pale orange-and-brown-figured tie he wore. He took it off and gave it to me. I did not fawn on Lowell the poet. I did not collect bits of his clothing like his valet. Yet he once made a terrible accusation as if I were. "You use people," he told me. It was a night when he was "going off." Darkness hadn't yet come, but the light was dimming. I didn't know, as his older friends knew, how to recognize the spark that meant that, like Hieronymo, he would be mad again.

Regarding the ties, I believe that Walcott doth protest too much. It's not a fetish, just a desire to make off with a tiny splinter of your household god. One of my college professors owned a chocolate-brown suit that had belonged to Wallace Stevens. How he got hold of this item I don't recall, but I often pictured it hanging in his closet, possibly in an archival garment bag. What was it good for? Did the owner put it on when he wrote his own poetry, praying that the tropical wool still retained some juju in its stiff, bronze-decor-colored folds? And finally, a mea culpa: once, having recently read and admired The Sportswriter, I found myself sitting at a restaurant table adjacent to Richard Ford's. When his party left, I leaned over and swiped his fork. I was young, I was tipsy, and yes, I gave the tines a quick wipe with my napkin, then stuck the fork in my jacket pocket. I don't know what that was good for either. Later on, with a strange twinge of guilt, I threw it away.

Comments:
Is this a form of Stockholm syndrome? I can't understand why hugely high-achievng and brilliant women - Marina Warner, Hermione Lee, Elleke Boehmer - who have fought for decades to re-set the male/female bar to equality should now be backing a man who has not only admitted exposing young female undergaduate students to sexual harrassment but also sexual blackmail. Is it that they no longer care about the original struggle? Or that they don't know (as I should prefer to believe) about the two - and I now gather three - sexual harrassment cases against Derek Walcott? He is a genius, yes, but are they saying that genius trumps normal and appropriate behaviour when it comes to young female students. That it is therefore acceptable for Walcott to importune young women students. I just don't understand their logic? Perhaps you could ask them all to explain?

I suppose you would have to ask Marina Warner, Hermione Lee, and so forth. My guess? They've heard about Walcott's shitty behavior back in the 1980s and consider it abhorrent. They also admire his poetry and perhaps know him personally--and finding him a charming, brilliant guy, they silently hope that he's atoned for his retrograde past, learned his lesson, etc. I wasn't suggesting that his poetic talent makes it all okay. It certainly doesn't balance the books for the women he pressured to sleep him. But when you're seeking a poet for the chair at Oxford, you might weigh the art against the personal imperfections. Or you might not. Me, I don't have a vote.

You threw it away???

What did I need a dirty old fork for?

Lots of things baffle me about this business, but one curious thing is why the student who went to the authorities at Harvard in 1982 is consistently described as "anonymous", even (or especially) by Walcott's detractors.

We still may not know her name, but she *wasn't anonymous, since she quite rightly (and bravely) signed her name to the accusation she lodged with the Harvard authorities.

She equally understandably asked that her name be removed when the material was published in the Harvard Crimson.

One link to the present is that the ones who emerged with the most credit in 1982 were students and student journalists, and this is still the case.

Also the confusion then and now between material *distributed anonymously and anonymous material.

I'm reminded of the series of attacks levelled by (among other agents) the New York Times in the 1850s and after against George Matsell, then NY Chief of Police, paralled by a whispering campaign that he was a bully and a racist.

(He's still today, by default, described as "300 lbs of blubber and malice."

Oh right, one of the accusations leveled against Matsell (ultimately withdrawn) was that he wasn't a native-born American citizen and couldn't provide his birth certificate!

I recently came across your blog and have been reading along. I thought I would leave my first comment. I don't know what to say except that I have enjoyed reading. Nice blog. I will keep visiting this blog very often.