My report on J.M.G. Le Clézio's appearance at the 92nd Street Y has been posted over at Words Without Borders. The author was tall, dignified, and self-deprecating. There was no conversation about whether he had been surprised by the Nobel, but his wife, in Le Clézio's telling, knew exactly how to handle the long-distance call: "Someone said, This is so-and-so from the Swedish Academy, and she said to me, This is for you." The excellent interlocutor was Adam Gopnik (small, elated, with a slight Dick Cavett vibe), and here's a sample bit:

Travel seemed to be in his DNA, suggested Gopnik, not merely a matter of circumstance. Le Clézio agreed. His ancestors were from Brittany, which he compared to Ireland: a land whose perennial poverty caused its people to leave "whenever they could." Yet the one constant, no matter where Le Clézio ended up, was the French language. This first love, this loyalty, began during his childhood. "I very much enjoyed going through dictionaries," he recalled. "I still see life through those page, those definitions." 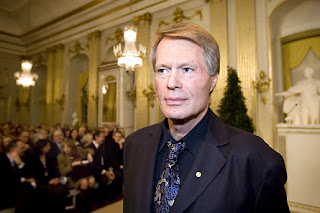 At this point the two writers shared a moment of lexicological bliss (Gopnik indicated a preference for the big illustrated Larousse). Then they moved on to another of Le Clézio’s early infatuations: J.D. Salinger, who Gopnik described as "one of the local gods" at The New Yorker. What the French author loved about Salinger was, in a sense, what he loved about the dictionary: an accumulation of luminous details, and the feeling that "each word is a world by itself." He had particular praise for "A Perfect Day for Bananafish," which he called "one of the best short stories ever written." Albert Camus also got high marks from his fellow Nobel laureate, for his refusal to deliver knee-jerk messages of affirmation.