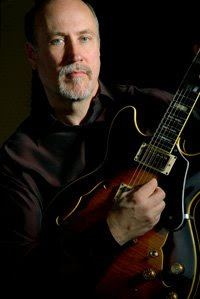 When four guys pull into town to play New Orleans-style funk, and one of them is ex-Meters bassist George Porter Jr., the bar is set very high. And during John Scofield's show last night at B.B. King's, I was initially disappointed by drummer Ricky Fataar's more relaxed groove. This is unfair: the guy is not Ziggy Modeliste. (Nor was Ziggy Modeliste a member of both the Beach Boys and the Rutles.) More to the point, Scofield isn't after a jazzier version of "Look-Ka Py Py"--his new recording, Piety Street, is an exploration of the gospel repertory, with a big dash of R&B and second-line levitation. John Cleary, a mainstay of Bonnie Raitt's band, handled most of the vocals, with a couple of contributions from the eternally young (he's 62) Porter. On organ and piano, Cleary also provided a solid foundation for the star of the night, the faintly professorial Scofield, who powered his way through "Walk With Me," "Ninety Nine And A Half Won't Do," "His Eye Is On The Sparrow," and a strutting "Something's Got A Hold On Me."

There were a couple of deviations from the gospel theme, most notably Hank Williams' "The Angel of Death," which the leader pronounced "the scariest song I've ever heard." It wasn't all that scary, to be honest, and it also seemed outside Cleary's comfort zone as a vocalist. But Scofield played an eloquent intro and some stabbing fills throughout, and was at the top of his game all evening. Most of his statements began with the blues, then branched out into trickier harmonic territory. Despite his level of drop-dead proficiency (which would probably give Leo Nocentelli nightmares), he never appeared to be phoning it in: the fireworks were genuine. And the crowd responded. The dance floor in front of the stage was packed with bobbing heads and swaying bodies, and even the hipster directly in front of me, with his shaved head and ironically clunky glasses, took off his jacket at one point and began some mild testifying. Can any performer ask for more?