While I wasn't looking, the 78-year-old J.G. Ballard died on Sunday. The BBC obituary quotes his agent to the effect that he been sick "for several years," and notes that Ballard himself, while frequently pigeonholed as a science fiction writer, described his books as "picturing the psychology of the future." I find it telling, and poignant, that although two of Ballard's books (Empire of the Sun and Crash) had been made into high-visibility films, the obituary's headline still calls him a "cult author." Perhaps his penchant for dystopian grime and queasy sexuality (which was surely part of the allure for Crash director David Cronenberg) kept the masses at a suitable distance. So did his cool sensibility, which occasionally tilted toward flat-affect, chrome-plated minimalism. 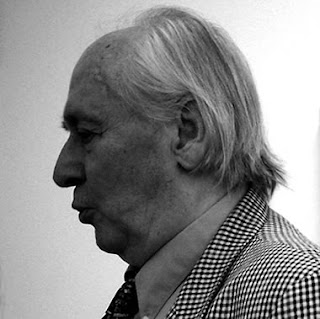 Still, Ballard strikes me as one of those authors with a distinctive enough vision of the world that his name is ripe for transformation into an adjective. (Whoops: it already happened.) I wrote about his work twice. The first time, I reviewed what must have been an American reissue of The Drowned World. The novel, Ballard's second, first appeared in England in 1962. By then the author had quit his assistant editor gig at Chemistry and Industry, a trade journal whose clinical tone may have crept into his own prose, keeping his sometimes florid surrealism in check. Where that piece I appeared I can no longer recall, but I did like the book's evocation of a drenched and diluvial planet--which, in the age of Katrina and a melting polar ice cap, seems less science-fictional with each passing year.

Later on, in 1989, I reviewed Running Wild for the New York Times. Reading the tiny piece now, I feel slightly embarrassed by my dismissive tone, but I doubt that this particular book will loom very large in the Ballardian (there we go) canon. Here's the piece in its entirety:

Over the last 25 years, the British writer J. G. Ballard has touched a great many stylistic bases, ranging from straight science fiction (The Drowned World) to abrasive experimentalism (Crash) to autobiographical realism (Empire of the Sun). But regardless of genre, Mr. Ballard's books have tended to share certain qualities, including a fascination with electronic media, a taste for black-comic paradox and, most of all, an ability to immerse the reader in different fictional worlds. Running Wild, which is presented as the forensic diaries of Dr. Richard Greville, a psychiatric adviser to the London police, certainly bears the first two of these trademarks. Greville has been asked to investigate the Pangbourne Massacre, a mysterious tragedy in which the 32 adult residents of an exclusive community 30 miles west of London have been murdered, and their 13 children apparently abducted. Who could have carried out such an atrocity? And why? Greville lists the various theories put forth by the authorities, in order of escalating absurdity. He watches hours of videotaped evidence and ponders the community's way of life, one in which "scarcely a minute of the children's lives had not been intelligently planned." Slowly--more slowly, in any case, than most readers--he comes to the conclusion that the assassins were the children themselves. The Pangbourne offspring, he concludes, "were rebelling against... a despotism of kindness. They killed to free themselves from a tyranny of love and care." Really? The assumptions Running Wild is supposed to challenge, such as the fairy-tale version of family happiness, haven't been widely accepted for decades. Nor has Mr. Ballard given himself ample space to compensate for his warmed-over concept: the novel's 104 pages immerse us no deeper than the ankles. Running Wild has its pleasures, but it's J. G. Ballard at his scantiest, his most reduced. What he gives us here is a dream communicated in Morse code.

Finally, I must note the existence of a superb fan site: Ballardian, already cited above. The archives include an excellent and expansive interview with the author. There is a chortling discussion of how one publisher's reader rejected the Crash manuscript with a couple of curt, diagnostic sentences: "This author is beyond psychiatric help. Do not publish." More to the point, Ballard defends even his darkest work as covertly affirmative:

You know, to be a human being is quite a role to play. Each of us wakes up in the morning and we inhabit a very dangerous creature capable of brilliance in many ways, but capable also of huge self-destructive episodes. And we live with this dangerous creature every minute we're awake. Something like The Atrocity Exhibition sums up my fiction: the attempt by a rather wounded character--in this case, a psychiatrist having a nervous breakdown; there are similar figures throughout the rest of my fiction--to make something positive out of the chaos that surrounds him, to create some sort of positive mythology that can sustain one's confidence in the world. Even something like Kingdom Come is affirmative, where I show a clear and present danger being dealt with, and one of the key figures responsible realizing the error of his ways. So in that respect, I agree with you completely: my fiction is affirmative.