After years of grumbling and repeated false alarms, EMI has finally announced that the full Beatles catalog will be released in spanking-new, digitally remastered versions on September 9, 2009. Folks, let's go straight to the press release:

Apple Corps Ltd. and EMI Music are delighted to announce the release of the original Beatles catalogue, which has been digitally re-mastered for the first time, for worldwide CD release on Wednesday, September 9, 2009 (9-9-09), the same date as the release of the widely anticipated "The Beatles: Rock Band" video game. Each of the CDs is packaged with replicated original UK album art, including expanded booklets containing original and newly written liner notes and rare photos. For a limited period, each CD will also be embedded with a brief documentary film about the album. On the same date, two new Beatles boxed CD collections will also be released. 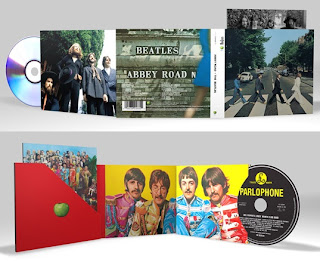 The albums have been re-mastered by a dedicated team of engineers at EMI's Abbey Road Studios in London over a four year period utilising state of the art recording technology alongside vintage studio equipment, carefully maintaining the authenticity and integrity of the original analogue recordings. The result of this painstaking process is the highest fidelity the catalogue has seen since its original release.

The collection comprises all 12 Beatles albums in stereo, with track listings and artwork as originally released in the UK, and Magical Mystery Tour, which became part of The Beatles' core catalogue when the CDs were first released in 1987. In addition, the collections Past Masters Vol. I and II are now combined as one title, for a total of 14 titles over 16 discs. This will mark the first time that the first four Beatles albums will be available in stereo in their entirety on compact disc. These 14 albums, along with a DVD collection of the documentaries, will also be available for purchase together in a stereo boxed set.

Within each CD's new packaging, booklets include detailed historical notes along with informative recording notes. With the exception of the Past Masters set, newly produced mini-documentaries on the making of each album, directed by Bob Smeaton, are included as QuickTime files on each album. The documentaries contain archival footage, rare photographs and never-before-heard studio chat from The Beatles, offering a unique and very personal insight into the studio atmosphere.

It seems like only yesterday that Allan Kozinn was griping about EMI's intransigence, and suggesting that DIY product from Dr. Ebbetts or Purple Chick would have to satisfy our longings for the conceivable future. Now comes this delightful cornucopia, which will siphon a great many dollars from my pocket and put my old 1987 CDs into permanent storage. Just for the record, I will not be buying the additional box of mono mixes, described by EMI as "for collectors only." A second codicil: I am ecstatic to see these remasters under any circumstances, but very faintly indignant that they have been timed to coincide with the release of the "Beatles: Rock Band" video game. Why not just skip this asinine (and, I'm sure, enormously lucrative) merchandising gimmick, declare a bank holiday on September 9, and be done with it?

A few additional details. EMI has supplied some information about the mastering process itself (I assume this exists on the official Beatles site, but I found on Steve Marinucci's Fab-intensive Examiner blog). Good to know they're blowing dust off the tape heads between each song. Even more interesting is the discussion of audio restoration and noise reduction:

Transferring was a lengthy procedure done a track at a time. Although EMI tape does not suffer the oxide loss associated with some later analogue tapes, there was nevertheless a slight build up of dust, which was removed from the tape machine heads between each title.

From the onset, considerable thought was given to what audio restorative processes were going to be allowed. It was agreed that electrical clicks, microphone vocal pops, excessive sibilance and bad edits should be improved where possible, so long as it didn't impact on the original integrity of the songs.

In addition, de-noising technology, which is often associated with remastering, was to be used, but subtly and sparingly. Eventually, less than five of the 525 minutes of Beatles music was subjected to this process. Finally, as is common with today’s music, overall limiting--to increase the volume level of the CD--has been used, but on the stereo versions only. However, it was unanimously agreed that because of the importance of The Beatles' music, limiting would be used moderately, so as to retain the original dynamics of the recordings.

My hackles rose (quite a sight, by the way) at the part about microphone vocal pops. For the uninitiated, non-geek visitors to HOM: when a singer records in a studio, a thin sheet of nylon mesh is positioned in front of the microphone. This prevents plosive consonants like "P" and "B" from overloading the recording and causing distortion. Back in the glory days at EMI, the Beatles actually used a more substantial variety of screen: a curved rectangle of metallic mesh that was snapped right onto the microphone. And they mostly worked. That's why the "P" in "Sergeant Pepper" doesn't sound like a champagne cork exploding next to your ear. Now, I know the engineers supervising these remasters have the right, reverent attitude toward their source material. But the idea of muffling vocal pops and sibilance does raise some interesting questions about how much tinkering is permissible. Will the sharp intake of breath in "Girl" lose any of its agonized languor? I hope not.

Finally: many fans will assume that this great leap forward will also open to the door to track-by-track sales of Beatles music at online stores. Apparently that's not the case. According to this piece by Robert Andrews at paidContent.org, the longstanding wrangles between EMI and the surviving Beatles about online sales have not yet been resolved. The issue seems to be, uh, money. Andrews does speculate about which format will eventually give Beatles fans the most bang for their buck when online distribution does get underway. In the end, however, this quibbling over compression formats is getting less relevant by the minute. The bad news for the Beatles--and for every other recording artist--is that once the remasters go on sale, FLAC versions will immediately pop up on torrent sites around the globe. Me, I want the fancy package and the legit discs, but I'm a little old-fashioned that way. Meanwhile, lossy formats like MP3 and AAC work just fine for anybody born after, say, 1987. There's no turning back the clock:

But the Rock Band project is clearly about more than just the game, and the harmony that broke out between EMI, Apple Corps and new game partner Harmonix for the game will have had an interesting side-effect. Producer Giles Martin, son of Beatles producer Sir George, had said the game will adhere to his father's original mixes. Tidied up with today's audio editing software for the game and now the CD reissue, they may also sound good enough to take advantage of modern, digital sound systems. Distributed online, however, the new high fidelity would be all lost as MP3 or AAC and would depend on high-quality FLAC files, still used only by audiophiles.

This is a good post, James: one that again demonstrates the problems of digital "mastering" in relation to very specific engineering. Personally, I fear a world in which the Beatles's catalog is eventually mastered by the tone-deaf scoundrel who mixed Metallica's "Death Magnetic" at the loudest possible level. (Too lazy right now to Google the sine wave comparisons that some geeks did, but easily locatable if you're curious.)

And I'm not yet 35, and love the Beatles. I am also known to attend shows that don't befit my age. (I was called "Dad" by a group of jeering 22-year-olds at a Spoon concert last year. It might be argued that Spoon is a "boy band," but I like their music.) Age doesn't dictate tastes. You may not care for the Beatles, anonymous coward, but you know nothing about music if you're dismissing their achievements (and those of George Martin's) as merely that of a boy band. Or have you even listened to the whole of "Revolver?"

Thanks for stopping by, Ed, and I'm glad you enjoyed the post. You're right, the bigger danger is probably the application of limiting (i.e., compression), which makes the music sound louder and punchier but narrows its dynamic range. Many an analog-to-digital transfer has been ruined by this very process. As for that anonymous commentator--what the hell, if he (sounds like a guy) wants to deprive himself of such beautiful, inventive music, that's his problem. The same logic would prevent me from enjoying contemporary weirdos like D.M. Stith or, for that matter, Duke Ellington.

I recently came accross your blog and have been reading along. I thought I would leave my first comment. I dont know what to say except that I have enjoyed reading. Nice blog. I will keep visiting this blog very often.

Really looking for these! The mic-popping problem was most evident on the "I'm a Loser" session, where they had to keep stopping because of it (George Martin: "Pop of the mic. Ap-PEAR to be.")