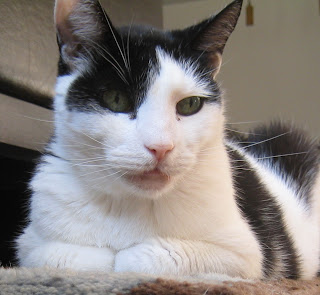 I'm very sad to say that Al died last night. He was twenty years old, a venerable age for a cat, and had already survived more than one brush with death. His kidney was failing, and over the last few months he had become increasingly gaunt, but he remained a sociable little being to the very end. I do believe he had a soul--a small one, no bigger than an apricot--and that's what I will miss.

I keep thinking of Wislawa Szymborska's "Cat in an Empty Apartment," which I wrote about on this blog once before. The situation in the poem is different: the cat has survived its master (not an appropriate word, given the upper hand many felines have in the household). But the sensation of grief, and of an inexplicable vacancy, feels just right. So I'll quote it again in its entirety:

Die--you can't do that to a cat.
Since what can a cat do
in an empty apartment?
Climb the walls?
Rub up against the furniture?
Nothing seems different here,
but nothing is the same.
Nothing has been moved,
but there's more space.
And at nighttime no lamps are lit.

Footsteps on the staircase,
but they're new ones.
The hand that puts fish on the saucer
has changed, too.

Every closet has been examined.
Every shelf has been explored.
Excavations under the carpet turned up nothing.
A commandment was even broken,
papers scattered everywhere.
What remains to be done.
Just sleep and wait.

Just wait till he turns up,
just let him show his face.
Will he ever get a lesson
on what not to do to a cat.
Sidle toward him
as if unwilling
and ever so slow
on visibly offended paws,
and no leaps or squeals at least to start.

Comments:
Sorry for your loss.

Many thanks. We still can't believe he's gone.