Strange. I was just in the elevator, having made a thrilling trip to the ATM and supermarket, when I heard something familiar playing on the recessed speakers. There is always music in the elevator, and the volume is always turned down to the ghostly edge of audibility. You don't hear it--you sense it through your pores. Still, I swore they were playing Sibelius's "Valse Triste." To make sure, I hit the Open Door button and held it until the alarm bell went off. Yep, it was the Sibelius. I had never heard this lovely, wistful fragment (I think of it as a 45 RPM single with a big hole in the middle) before March 2, when I attended a concert at the refurbished Alice Tully Hall. Paavo Jarvi led the Deutsche Kammerphilharmonie Bremen, and the bulk of the program was Beethoven: Symphony No. 1 and Symphony No. 3. Jarvi is a small, highly energetic figure. At some moments he seemed almost stiff, with a carriage not unlike a toy soldier. Then he would erupt into ferocious body language, including a great deal of micro-managerial action with the left hand. 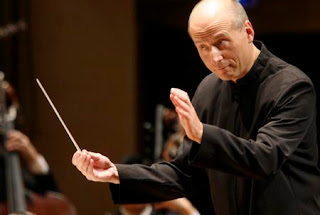 I enjoyed the Beethoven--it was swift, vigorous, non-reverential. In his review, Allan Kozinn beat up on the hall's retooled acoustics, which he found too dry. It's true that the opening salvo of the Eroica just vanished into thin air, with no reverberation. But what you lose in grandeur, you gain in intimacy. In any case, once the program was over, Jarvi returned to the podium for a performance of "Valse Triste." I didn't know what it was. I did know that it was beautiful, and that I had never heard a symphony orchestra play that quietly before. It was almost like being in the elevator. The entire audience leaned forward in its seats. Now, as I would subsequently discover, some critics have taken Jarvi to task for this extravagance. In August 2007, James Oestreich gave him a thorough scolding:

An occasional showiness on Mr. Jarvi’s part came to the fore not, oddly, in a gaudy moment but in a quiet one. In an otherwise lovely encore, Sibelius’s “Valse Triste,” he reduced a string passage to a pianissimo on the very edge of audibility. (Pianissimos of any kind had not been prominent in the Beethoven.)

This brings up an interesting point. To my vulgar ear, Jarvi's tamped-down dynamics sounded wonderfully expressive, not showy. Of course I've never seen the score and have no idea what Sibelius called for. But I'm not a strict constructionist and assume that even the most manically exact composers (Mahler is a classic example) will elicit a range of interpretations. Speaking of which, I downloaded a version of "Valse Triste" the moment I figured out what it was. As it happened, the performance by the Gothenburg Symphony Orchestra was conducted by Neeme Jarvi, the father of Paavo. And you certainly couldn't accuse the elder Jarvi of dabbling in sound-of-silence gimmickry. Compared to his son's delicate reading, this one sounds more like falling down a flight of stairs. Still pretty, though.

PS After I wrote the preceding, I came across this clip of Jarvi leading the same orchestra through "Valse Triste" in 2006. At the 1:30 mark he dials down the ensemble to near silence, and thirty seconds later, he and the orchestra appear to be posing for a still photograph. The clip has been viewed 68,120 times, which suggests that I'm a little late to the party on this one: