A book for animals

Books tend to collect in what Max Reger famously called the smallest room in the house. Yesterday morning there were three, daintily stacked behind the door: The Hero and the Blues, The Deaths of Louis XVI: Regicide and the French Political Imagination (you'll have to ask Nina about that one), and Prince of Darkness and Other Stories. The latter is a favorite of mine, by J.F. Powers, and during the afternoon I rescued it from its purgatory and reread "The Old Bird, A Love Story." With the economy still drooping, I was struck by one paragraph in particular. The protagonist, an aging businessman who has lost his job, is offered a lowly gig in the shipping room of a department store. Powers nails his response--the flicker of pride, the rapid surrender--to perfection: 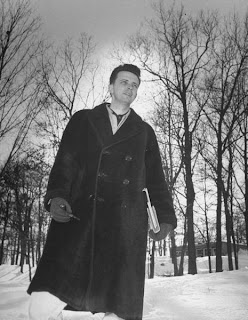 For an instant Mr. Newman succeeded in making it plain that he, like any man of his business experience, was meant for better things. A moment later, in an interesting ceremony which took place in his heart, Mr. Newman surrendered his well-loved white collar. He knew that Mr. Shanahan, with that dark vision peculiar to personnel men, had witnessed the whole thing.

Powers knew exactly what he was talking about, having held down a succession of small-potatoes jobs: "He worked as a salesman for Fidelity Insurance, a sales clerk at Marshall Field’s, a chauffeur for a wealthy investor touring the South, an editor for the Chicago Historical Records Survey, and a clerk at Brentano’s bookstore--where he used the shelves to complete his education and to force his favorites on the customers." (The quote is from Joseph Bottum's excellent piece in First Things. There, too, you can find Powers's exasperated response when Morte D'Urban was categorized as a book for Catholics: "Would you say that The Wind in the Willows is a book for animals?") But in the photo here, dredged up from the fascinating Life archives, the youthful, pipe-smoking author seems to be in excellent form, far from the madding crowd at Marshall Field's. There is snow on the ground, a book under his arm, a mild halo of Midwestern light around his head. Those interesting ceremonials of surrender, the ones in the heart, had yet to take place.