There is an assumption that essayists must be introverts. It probably starts with Montaigne, who retired from public life and more or less pulled up the drawbridge in order to write his fat volume of essays. He went so far as to have a navel-gazing mission statement inscribed on the walls of his study: "In the year of Christ 1571, at the age of thirty-eight, on the last day of February, his birthday, Michael de Montaigne, long weary of the servitude of the court and of public employments, while still entire, retired to the bosom of the learned virgins, where in calm and freedom from all cares he will spend what little remains of his life, now more than half run out." Still, there is an equal and opposite tradition of the essayist as fact finder. The late David Foster Wallace, whose sprawling novels always beat with an essayistic heart, noted that practitioners of the genre "watch over other humans sort of the way gapers slow down for car wrecks: they covet a vision of themselves as witnesses." 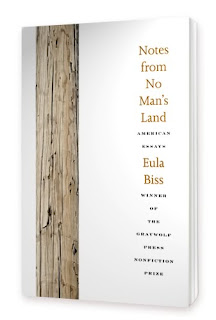 In any case, these thoughts were occasioned by a paragraph I came across last night in Eula Biss's Notes from No Man's Land. Her topic, often, is race--still a thorn in the side of America's collective consciousness, even with Barack Obama securely lodged in the Oval Office. Yet her approach is highly varied, mingling the personal and historical as if to insist that only an amnesiac would do otherwise. And her research does bear some amazing fruits. "Relations," for example, is about dolls--black ones and white ones. Biss discusses her own girlish pastimes with the doll she named, in an engagingly no-frills style, Black Doll. Inevitably she grapples with Barbie and her multi-hued entourage, and it was the sheer, comic compression of these sentences that caught my eye:

In 1959, Mattel introduced a doll that was, unlike most dolls marketed for children, not a baby doll. This doll had breasts and makeup and was modeled after a doll sold in Germany as a gag gift for grown men. The man who designed the American version of the doll, a man who had formerly designed Sparrow and Hawk missiles for the Pentagon and was briefly married to Zsa Zsa Gabor, was charged with making the new Barbie look less like a "German street walker," which he attempted in part by filing off her nipples.

I doubt that Biss accumulated those facts in some dusty archive at the International Center for Barbie Studies. If she did, bravo. But what really impresses me is the way they're deployed--at a brisk clip we get the transition from baby to miniature bombshell, which seems weirdly appropriate given the designer's resume. (So does his brief union with Zsa Zsa Gabor, whose hourglass figure may be lingering in the background.) That leaves the filed-off nipples, at which point the comedy is terminated and Barbie becomes, well, respectable. Perhaps Biss can be persuaded to add an envoi about the transformation of the Obama girls into Beanie Babies. 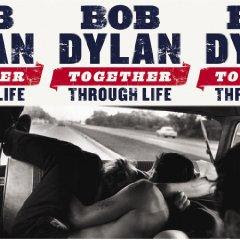 On another note (but give me time, maybe I can come up with a Barbie connection), I'm hugely thrilled at the prospect of the new Bob Dylan CD, Together Through Life. With his gambler's mustache and cowboy wardrobe, he seems to be on a roll, serenely unconcerned with fame (he's had it spades), wealth (ditto), or the overwhelming shadow of his own creative past. The disc doesn't come out until April 28 (and yes, I already pre-ordered the deluxe edition with a bonus CD, a bonus DVD, collectible poster, sticker, and what is rumored to be an actual lock of Dylan's hair). Meanwhile, the label threw a listening party for a select group of lucky ducks, Alex Ross and Ann Powers among them. On the strength of single spin, they both gave the Bard of Hibbing high marks. Said Ross: "To my ears it was no letdown after Dylan's recent trilogy of new material--Time Out of Mind, Love & Theft, and Modern Times." Added Powers: "Bob Dylan can do whatever the bejeezus he wants."

Dylan himself chimes in via an interview on his official website. At one point the interviewer suggests that Together Through Life has an old-fashioned immediacy associated with early Sun or Chess recordings:

Dylan: Oh yeah, very much so... the old Chess records, the Sun records... I think that's my favorite sound for a record.

Dylan: I like the mood of those records--the intensity. The sound is uncluttered. There's power and suspense. The whole vibration feels like it could be coming from inside your mind. It's alive. It's right there. Kind of sticks in your head like a toothache.

If you absolutely must experience that toothache prior to April 28--and I'm afraid I fit into that category--you can purchase the first cut, "Beyond Here Lies Nothin'," as a single. It is, as Powers notes, "a celebration of the Latin influence that also shaped early rock," with a percussive swagger and Dave Hidalgo's norteño-flavored accordion (evidently a sonic trademark throughout). The lyrics lean toward the generic, but what the hell--this is intensely atmospheric music, with a period flavor you can't quite identify and Dylan's grizzled voice alternately parting the fog and darting back into its recesses. I can't wait to hear the rest of it.