Slip it to me, Bert

As I noted in a recent post, Paul McCartney is still on the revisionist warpath. First he asserted his cred as a sonic pioneer (apparently choosing to ignore John Lennon's sardonic definition of avant-garde as "French for bullshit," which Lennon also ignored when it came time to make his own musique concrète mudpies). Now he claims to have been the first of the Fabs to take a stand against the Vietnam war, egged on by a visit with Bertrand Russell. In an interview with Prospect magazine (excerpted here in the Telegraph) he recalls the galvanizing effect of his conversation with the 92-year-old philosopher and peace advocate: "He was fabulous. He told me about the Vietnam war--most of us didn't know about it, it wasn't yet in the papers--and also that it was a very bad war. I remember going back to the studio either that evening or the next day and telling the guys, particularly John, about this meeting and saying what a bad war this was." 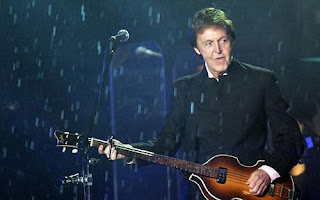 What is poignant here is Macca's need, more than forty years after the fact, to demonstrate he was no mere camp follower. Surely he must understand that he's got nothing to prove? Perhaps not. As a friend said to me the other day: "I've got plenty of grievances from last week, but I've got millions of grievances from back when I was in my twenties." The first cut--or, let's say, the first thousand cuts--may well be the deepest after all. In any case, McCartney's close encounter with the kingpin of analytic philosophy is not really news. He discussed it in Many Years From Now (1996), in very similar terms but with an extra dash of detail:

Bertrand Russell lived in Chelsea in one of those little terrace houses, I think it was Flood Street. He had the archetypal American assistant who seemed always to be at everyone's door that you wanted to meet.

I sat round waiting, then went in and had a great little talk with him. Nothing earth-shattering. He just clued me in to the fact that Vietnam was a very bad war, it was an imperialist war and American vested interests were really all it was all about. It was a bad war and we should be against it. That was all I needed. It was pretty good from the mouth of the great philosopher: "Slip it to me, Bert."

I reported back to John, "I met this Bertrand Russell guy, John," and I did all the big rap about the Vietnam war and stuff, and John really came in on it all. And then he did How I Won the War.

It can't be an easy task to settle psychic accounts with your dear friend, ferocious rival, and eternal (in every sense of the word) big brother. We can forgive the petulance in deference to the real pain behind it. On the other hand, Macca should stop strafing the Dalai Lama for eating an occasional hamburger. The guy needs his protein.

Comments:
Fun to read, but give the guy a break! If I had people fact-checking every statement I made, looking for inconsistencies and apparent contradictions, I'd be screwed!

Oh, I'm not giving Sir Paul a hard time about inconsistencies. His every offhand comment has been madly scrutinized for nearly half a century--he's earned the right to wallow in contradictions. Hell, I can't even remember what I had for breakfast this morning.

On the other hand, I'm delighted to hear that the Dalai Lama eats burgers. There are loads of vegetarians I know who I'd love to go tell that to right this minute - but I won't, because it's 3 in the morning.

Hope you're well, happy new year & all that!