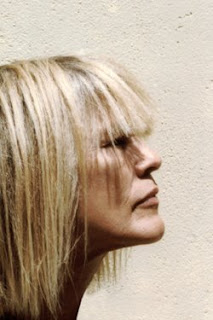 Last night I attended a performance by Carla Bley at Birdland. Although she has spent much of her career playing trios and duets, often with her longtime companion Steve Swallow, I still associate her with the plush sonics of Escalator Over The Hill or her arrangements for Charlie Haden's Liberation Music Orchestra. What we got instead was exquisite (but by no means bloodless) chamber jazz, which pitted the pianist against Swallow's bass and Andy Sheppard's tenor and soprano saxophone. No free blowing here: the pieces, which included both new compositions and some golden (more or less) oldies, were meticulously arranged. To kick things off, for example, the trio played a new suite called "The National Anthem." From time to time a phrase from "The Star Spangled Banner" would pop up, like an apparatchik on a reviewing stand, before vanishing back into the fray. Yet I wouldn't say that Bley was making any sort of snarky statement at the anthem's expense--her tinkering with harmony and cadence seemed entirely affectionate. And Swallow executed his funky double stops with audible gusto, bending at the waist and almost crouching as he made like one of the Famous Flames.

The program continued with such gems as "Awful Coffee," "Tropical Depression," and "Sidewinders in Paradise." At one point Bley mentioned that she had worked as a cigarette girl at the original Birdland--now an escort club, according to Swallow. In the light of these disclosures, was hard to figure out how good the good old days were supposed to be. In any case, the pianist's famous legs, so often on display in otherwise gender-neutral profiles and reviews, were under wraps. Bley wore a black suit, black socks, black shoes. Her touch on the keyboard is still wonderfully distinctive, as is her approach to arranging--she makes even a skeleton crew like this one sound like a miniature orchestra. And that ingenuity is hardly confined to her own pieces. It takes real gall to tamper with Monk, after all, but her version of "Misterioso," which closed the set, was a reverent deconstruction. There's no disguising those loping sixths, so Bley simply made herself at home in them. So did Sheppard, whose breathy tone didn't prevent him from channeling Charlie Rouse at the appropriate moments.