Exactly a week ago, PEN chose a rather grand location to announce the participants in the next World Voices Festival: that would be the Queen Mary 2, docked out in a shiny new Red Hook terminal. The ship is vast. Security is tight--this was probably the first literary soiree at which I had to sign a statement promising that I had experienced no diarrhea or vomiting in the last 48 hours. Once we were cleared for entry, we marched up an elaborate gangplank into what resembled a premiere shopping mall (and I mean that in the nicest possible way): lots of glass, indirect lighting, hardwood accents. Lots of stores, too, at least on the way to the auditorium. Inside, we sank into the comfy seats and were addressed by Bernard Warner, Commodore of the Cunard Fleet. This upright gentleman in his spotless uniform turned out to be a highly entertaining speaker. "We are not a cruise ship," he assured the crowd, in case anybody had mistaken his resplendent vessel for some downmarket tub. What did the Queen Mary 2 have that a cruise ship didn't have? "We have forty percent more steel," Warner noted. "We have a long bow, a deep draft, and a gorgeous streamlined hull." 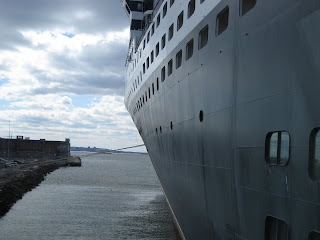 The double entendres flew thick and fast, but Warner was too much of a pro to wink at the audience. Instead he brought out PEN Executive Director Michael Roberts, who spoke of "the essential oneness of countries and cultures." Surely, I thought, it would be his job to forge a metaphorical link between this gorgeous streamlined hull and the festival itself. Roberts did not disappoint. The Queen Mary 2, he said, "exists to bring people across the oceans that divide us, in the most beautiful way"--fulfilling the exact same purpose as the PEN World Voices Festival. Swish!

The fact soon came out that Salman Rushdie, who had been slated as ringmaster, was not present. He was in London, promoting his new novel. Luckily Francine Prose--introduced as "our ship's captain"--was on hand to do the honors. We had already been presented with some imposing numbers, inspired, perhaps, by the commodore's statistical snow job. The festival would boast 170 writers from 51 countries, speaking 23 different languages. But Prose went into more detail, listing the highlights of a mind-blowing schedule. It's a truly dazzling roster: from André Aciman to Lila Azam Zanganeh, no authorial stone has been left unturned. Prose mentioned "The Three Musketeers Reunited: Umberto Eco, Salman Rushdie and Mario Vargas Llosa," a May 2 recap of a 1995 event at London's Royal Festival Hall. No doubt this venerable power trio will cause the walls to bulge at the 92nd Street Y. (But will they play "White Room"?) Me, I'm psyched for the May 3 tete-a-tete between Ian McEwan and Steve Pinker, or the Robert Walser tribute later that same day at the Morgan Library.

Prose then surrendered the stage to what was described as "a musical collective of authors and artists"--which is to say, a pretty good band with a cute accordion player but no particular reason to be there. The crowd listened to the first tune with good-natured receptivity, but got a little twitchy as the show continued. "This next song is to mark the fifth anniversary of the Iraq war," we were told. I'm sure many of the audience members disapproved of the Iraqi adventure, but that didn't mean we had to enjoy the chorus, sung by the three female members of the band: "Die, motherfucker, die!" Only the last tune, "Paperback Writer" (witty choice, folks) won them back some points. What's more, Dale Peck and Jonathan Ames climbed onstage for the finale, gamely shaking their tambourines, while another, less identifiable audience member was dragooned into playing the kazoo. An excellent lunch followed, in a handsome dining room with multiple water views: here, at least, you knew you were on a boat, rather than in the guest quarters at Mar-A-Lago. And so, after a lengthy wait to retrieve our passports and driver licenses, ended our afternoon on the Queen Mary 2. The PEN World Voices Festival will be an obvious blast. As for the ship itself: despite my caustic tone, I could hardly bear to step off the gangplank and return to the grubby, non-nautical world from whence I came. I dearly wish to cross the Atlantic on the Queen Mary 2, paying for my bed and board by giving literary talks to all comers in the Veuve Clicquot Champagne Bar. Are you listening, Commodore Warner?

Comments:
I am proud to announce that I was the less recognizable kazoo player. I am a proud PEN Board member, so I was eager to help the cause of the Festivall. Also, I'd had two glasses of champagne.

Hi Fran. Thanks for stopping by and identifying yourself--very sporting of you. I should also add that you handled that kazoo with real elan. Unless that was the second glass of champagne?