Good news (courtesy of Kerry Fried): in May, Fourth Estate will publish So I Have Thought of You: The Letters of Penelope Fitzgerald. I think we're in for a treat. The late author never caught up with email, SMS, or emoticons--she corresponded in the classic manner, with a pen and paper and an instinctive command of English prose. Incidentally, she also had the sort of handwriting that is vanishing from the earth. The only reason I know this is because I own a tiny specimen of her calligraphy--a note tucked into my first edition of Offshore (for which I also have Kerry to thank). As can see, Fitzgerald was responding to a query from a bookshop owner, who thought she might be interested in a cache of books on Cairo. She directed him elsehwere: "I wonder whether you could be thinking of Penelope Lively, who lived in Egypt as a child?" Some authors might have been peevish about this case of mistaken identity. Fitzgerald was not. I also like that other line: "I don't collect books at all, they just seem to accumulate of their own accord." Here we go: 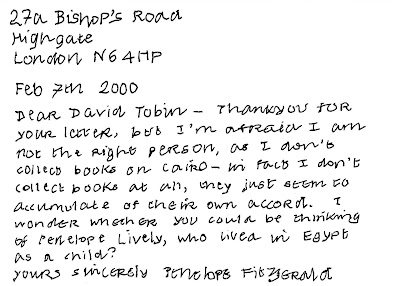 On another note entirely, I backslid and starting poking around YouTube again. This formidable time sink must be avoided at all costs. In the meantime, though, here's an ancient clip of the Grateful Dead, culled from an old broadcast of Playboy After Dark (I'm not making this up). Check out Jerry's serape, and Bob Weir's preppy outfit--he could have stepped out of a Gap ad, minus the psilocybin. Special period touch: the superimposed flashes of groovy dancers, which I initially thought were defects in the old film stock. They just don't make them like this anymore.