Heads up on Herbert 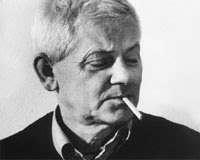 Next week, Cynthia Haven and I will be overseeing a Words Without Borders book club--an online conversation, more or less--devoted to Zbigniew Herbert's The Collected Poems 1956-1998. I'd love to say that Herbert needs no introduction, but this giant of postwar poetry, who died in 1998, is still woefully undervalued in the English-speaking world. He is certainly on par with his compatriots Czeslaw Milosz and Wislawa Szymborska, even if the Swedish Academy declined to recognize that fact. And his poems, with their pained dignity and dearth of punctuation, deliver a frisson like no other. The WWB discussion will include contributions from a wide range of Herbert experts, including (so far) Peter Dale Scott, Anna Frajlich, Andrzej Franaszek, William Martin, and Alissa Valles (who translated most of the new Ecco collection). Come one, come all! In the meantime, I suppose the best possible advertisement would be a snippet of the poetry itself. Here's the first segment of "Mr Cogito and the Imagination," which features the poet's favorite mouthpiece, who walks and talks (but mostly thinks) like Herbert himself:

Mr Cogito has never trusted
the tricks of the imagination

he lived in a cellarless house
without mirrors or dialectics

jungles of tangled images
were never his homeland

Stay tuned for more details, and a specific URL, early next week. And grab yourself a copy of The Collected Poems, or check out the superb essays collected in Barbarian in the Garden or The King of the Ants, which prompted the following micro-review from yours truly in 1999:

Although he never quite attained the fame of his compatriots Czeslaw Milosz and Wislawa Szymborska, the late Zbigniew Herbert was one of the giants of contemporary Polish letters--not to mention European literature at large. His witty, superbly ironical verse flourished in the face of totalitarian censorship: indeed, with its overlay of parable, allegory, and deadpan allusiveness, it seemed almost to be nourished by the ideological obstacle course of 20th-century Poland. But Herbert was an equally gifted essayist. The pieces collected in Barbarian in the Garden and Still Life with a Bridle are wickedly intelligent and unfailingly humane. And even when the author is letting loose with a satirical dart, his imagination always functions as "an instrument of compassion."

The King of the Ants combines his twin vocations. That is, these are short prose pieces, which Herbert called "mythological essays." Yet the form itself--in which he takes apart the classic myths and expertly tinkers with their innards--has the speed and epigrammatic suavity of his best poetry. Here, for example, is Herbert's take on Atlas, whom we might call the king of mythological heavy lifting.

"The whole character of Atlas, his entire being," Herbert writes, "is contained in the act of carrying. This has little pathos, and moreover it is quite common. The titan reminds us of poor people who are constantly wrestling with burdens. They carry chests, bundles, boxes on their backs, they push them, or carry them behind, all the way to mysterious caves, cellars, shacks, from which they come out after a moment even more loaded, and so on to infinity."

Herbert is no less intrigued by Antaeus, who went head to head with Heracles himself in a celebrated wrestling match. On one hand, he tries to visualize the actual bout, taking his clues from accounts by Plato, Pindar, and the Renaissance miniaturist Antonio Pollaiuolo. But it's the metaphorical implications of the match that really get him going--the way it reverses our usual image of victor and vanquished. His subject, he reminds us, "had to overcome the concept, deeply rooted in us all, of what we call high and low, the elevation of the victor and the throwing of the defeated down into the dust. For every time Antaeus was lifted up, it meant death for him." In the author's hands, these musty figures become almost alarmingly contemporary--and entertaining. And while he never weighs down his essays with philosophical ballast, they do contain more than their share of casual wisdom. Like the philosophers he mentions in the title essay, Herbert too had "the not very tactful habit of teaching others how to live."