A night at the NBA 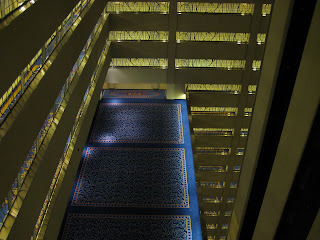 By now, the results of last night's National Book Award ceremony are widely known--the only remaining surprise is that I can still fit into my tuxedo. I attended as a civilian, with no obligation to write down a word. I felt no anxiety wandering the vast, depopulated public spaces of the Marriott Marquis, whose lobby resembles a Saturn V launching pad. My plan was to sit at the big round table right under the left projection screen, eat the food, laugh at Fran Lebowitz's punchlines, and generally have a good time. But there was a notebook in the pocket of my tuxedo, and as I studied the arrangement of slender trees that served as the backdrop, some of them shedding red leaves onto the stage even as we watched, I couldn't resist. I shoved the appetizer plate, with its shiny pool of Sherry Mustard Vinaigrette Crème Fraîche and Paddlefish Caviar, off to the side. Ladies and germs, I took notes.

Lebowitz, in a tuxedo and heels, was just fine. She joked about the striking writers, the striking stagehands. She joked about the unhappy divide between winners and losers, and gently tweaked Toni Morrison, who was sitting at the next table with large gold hoops in her ears and a smile on her face. "You're not going to get anything tonight," Lebowitz told her. This quasi-taunt was permissible because Morrison had already bagged the bigger game--the one you get in Stockholm, along with all the lutefisk you can eat--and she took it in stride, laughing at Lebowitz's image on the big screen.

She introduced Michael Cunningham, who would be presenting Joan Didion with the Medal for Distinguished Contribution to American Letters. All men look better in a tuxedo: Cunningham looks like he was born in one. He praised the honoree for her "fearless and almost frightfully astute vision of the world." His delivery was effective but occasionally a little hammy, with sudden accelerations and downshifting pauses that reminded me of William Shatner. (Not an insult in my book, by the way.) "You can set a drink down on a Joan Didion sentence," he asserted--surely the first time anybody has compared her prose to a cocktail coaster. And now Didion ascended the stage to a great round of applause. A tech guy scuttled out with a box for her to stand on, but she waved him away. Good for her, I thought. 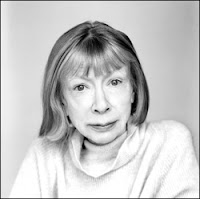 Didion is a small, commanding woman. She ran down some career highlights, including her dutiful trips to the freight terminal at LAX to send her copy winging its way to Manhattan. "This wasn't just before email," she pointed out. "This was before Fed Ex. That's how I happened to get the lifetime achievement award." I had never heard her speak in person before. Her voice, at least in this formal setting, was notably deadpan. It was like hearing somebody play a piano with only two keys--C and C-sharp. "The last time I was in this room," Didion concluded, "Norman Mailer was getting this award. There was somebody who truly knew what writing was for. Thank you."

Next, Ira Glass came out to present Terry Gross with the Literarian Award. What you thought of Glass's speech pretty much depended on your appetite for the mild, twinkling cadences of public radio. My attention began to wander halfway through and I nibbled on my second dinner roll. There was nothing offensive about it--indeed, something offensive would have been fun--but I did feel that Glass was overegging the custard. Gross herself was modest and amusing. And unlike Didion, she did assent to standing on the box: a pragmatist.

We ate our dinner. Lebowitz returned, and I noticed Jonathan Franzen, delicately tucking away his dessert at an adjacent table, cracking up at one of her sallies--so much for his dour rep. I'm not going to run through all the presenters and winners: you already know the outcome. I will note that Sherman Alexie gave a witty, heartfelt speech. "I obviously should have been writing YA all along," he began, and went on to praise such early inspirations as Ezra Jack Keats (for his "gorgeous loneliness and splendid isolation") and the Paiute poet Adrian C. Lewis--it was the latter's line about occupying "a reservation of my mind" that seemed to have steered Alexie to his vocation.

I had hoped David Kirby would win the poetry prize--his comical, freewheeling, deliciously learned narratives are a real addiction of mine. I saw him in the crush before the ceremony, and when I noted the NBA medallion he was wearing, he said, "I'm doing my Mark Spitz thing." Rim shot! But Robert Hass won, and delivered a wonderfully gracious speech, praising all of the other nominees at length and declaring that American poetry was in the midst of a bumper crop, that his peers were inventing "new shapes of feeling." He too brought up Mailer--it turned out that the 28-year-old Hass gave his first NYC poetry reading in the novelist's living room--and thanked Dan Halpern for many decades of support. His longtime editor stood to hug him as Hass returned to the table, and as the purple spotlights swept through the darkened ballroom, Halpern's distinctive head of hair lit up like a cumulus.

Tim Weiner, who won the nonfiction prize for Legacy of Ashes: The History of the CIA, made those declassified files sound like the mother of all paper trails. "You can see raw power at work," he said. "Those files show what America's leaders really wanted." Apparently the quotient of presidential fibbing is way higher than even the most cynical among us imagined. And Denis Johnson was, as his wife Cindy declared, "legitimately absent," hence her graceful turn as his proxy. Unless I'm very wrong, Johnson was the sole winner of the night to thank not only his editor, agent, publicist, and immediate family, but also the Almighty. But of course we never heard Christopher Hitchens's acceptance speech.