Dating Techniques of the Rock Stars, #1 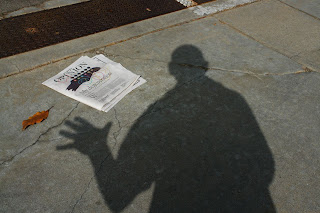 Here's a salient passage from Ron Wood's autobiography. Although I gave him short shrift in my puritanical op-ed a week or so ago, he does sound like good company. Here he and his wife Krissie pay a call on the Harrisons:

One night at George's house, Friar Park, in Henley I took George aside and told him quite seriously that when it was time for bed I would be going to Pattie's room. Seemingly unflustered he pointed to the room Krissie and I were staying in and added, "I shall be sleeping there." When the time came, the two of us were left on the landing, hands on knobs (doorknobs) of the respective rooms." "Are we going to do this?" I asked. "I'll see you in court," George replied and in we went. Pattie was a little surprised to see me. I told her I thought she was seriously neglected, was going to waste and unleashed that I felt so strongly for her. The following morning we were woken by George, who informed me that he had called his lawyers. He never actually did. Pattie and I headed off to the Bahamas and Krissie and George left for Portugal.

Ah, the swinging Sixties! Speaking of that op-ed, I got a delightful email the other day from one Max Jurek, who encountered the piece when the wind fetched up a stray copy on the sidewalk. Can there be a more organic form of viral marketing? Did the reddish leaf on the sidewalk show up at the same time? In any case, he took the quick snapshot above with his phone before picking up the paper.

Comments:
Hey, I'm no Bella Abzug but...yipes. What good sports those wife-units were back then!

Uh, yeah. But I don't think Pattie was too entranced by her marital situation at the time, either. In her book she simply recalls that George "didn't want to go on a holiday with me and ended up going to Spain, supposedly to see Salvador Dali, with Ronnie Wood's wife, Krissie... I was desperately hurt: another one of my friends was sleeping with George." Hmm? Did I miss something here?

J, we *all* "missed something" there...larf. Still, I wouldn't trade places; certainly not with George, at least, eh?