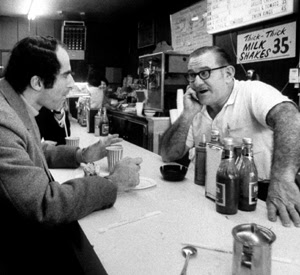 In the latest issue of The New Yorker, Hermione Lee chats with Philip Roth about Exit Ghost. (Here, by the way, is J. Hoberman's positive review of the book from The Village Voice.) The piece is a straight Q-and-A, and I suspect that it was conducted via email--or that Roth was allowed to edit his responses after the fact. I don't know how else to account for the canned atmosphere of the whole exchange. In his final comment, Roth actually admits to having "plucked" some of the sentences from a preface he wrote to a limited edition of The Human Stain. So much for spontaneity. Couldn't he have submitted to an actual conversation, not unlike the human encounter captured in this old photo from a Newark luncheonette? Still, there was at least one intriguing moment. Discussing Zuckerman's contempt for the aspiring biographer Richard Kliman in Exit Ghost, Lee asks: "What is the source of Zuckerman's animus against biography?" Roth concludes his answer this way:

No argument there. It's worth bearing in mind that Roth was conversing with an eminent biographer. Perhaps it would have been awkward to dismiss the entire profession as a pack of pathetic ambulance chasers. But a passage in Exit Ghost suggests a powerful kinship--an identification, really--between Roth's efforts as a novelist and the biographer's pursuit of that Holy Grail, his subject's "covert brand of baseness." Pondering his own, posthumous role as grist for the biographical mill, Zuckerman describes his future Boswell in oddly familiar terms:

An astonishing thing it is, too, that one's prowess and achievement, such as they have been, should find their consummation in the retribution of biographical inquisition. The man in control of the words, the man making up stories all his life, winds up, after death, remembered, if at all, for a story made up about him, his covert brand of baseness discovered and described with uncompromising candor, clarity, self-certainty, with grave concern for the most delicate issues of morality, and with no small measure of delight.

You could argue that Zuckerman is being sarcastic, idealizing Kliman for comic effect. But I don't buy it. Updike, meanwhile, airs his distaste for the biographical enterprise in one of the opening essays of Due Considerations. He writes:

Claire Bloom, the ex-wife of Philip Roth, portrays him as having been, as their marriage rapidly unravelled, neurasthenic to the point of hospitalization, adulterous, callously selfish, and financially vindictive. Paul Theroux, finding himself snubbed by his friend and mentor of thirty years, recounts all he can remember about V.S. Naipaul, including a host of racist, misogynistic, cruel, and vain remarks made in their--Naipaul must have thought--private conversations. Joyce Maynard fascinatingly recalls, as part of her rather arduous self-development, her affair with J.D. Salinger and thus lifts the curtain on the most celebrated privacy in America. Salinger is revealed as a food crank, a keen student of homeopathic medicine, a Reichian, a fan of old movies and present-day television, a man full of scornful opinions and rather creepily fond of very young girls. Maynard describes her inability to have genital sex with him and his insistence on her providing oral sex instead; she quotes, with more pertinence than perhaps she realizes, Salinger's saying, "It's a goddamn embarrassment, publishing. The poor boob who lets himself in for it might as well walk down Madison Avenue with his pants down." 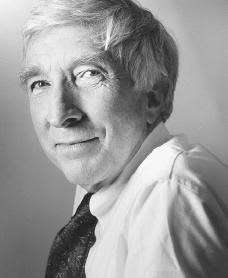 The relish of this passage, with its collateral damage to Bloom, Theroux, and Maynard, is unmistakable. To give Updike his due, he does consider these books part of a specialized genre: the "Judas biography," which is essentially an exercise in lip-smacking betrayal. But even a more decorous approach strikes him as a violation--a raid on his personal Fort Knox. "A fiction writer's life is his treasure, his ore, his savings account, his jungle gym.... As long as I am alive," he writes, "I don't want somebody else playing on my jungle gym--disturbing my children, quizzing my ex-wife, bugging my present wife, seeking for Judases among my friends, rummaging through yellowing old clippings, and quoting in extenso bad reviews I would rather forget." The experience-as-treasure metaphor is perhaps long in the tooth, but the jungle gym is a delightful touch. I picture the author hanging upside down, smiling, his famously sculpted and insubordinate hair resisting the tug of gravity. His face is pink. His car keys have fallen out of his pocket, along with some nickels and dimes. In his head, he's composing a long piece on Margaret Fuller, and you know it's going to be good.

Comments:
Fun! Oh, I'm warming back up to the old thing, that jungle gym remark does shine some light on a particular element of play that is everywhere in his style.

Yes, Updike is a playful fellow. Just for the record, I tried to flip that photo upside-down for a jungle gym effect, but it kept righting itself when I uploaded it.

oh, I'd have loved that!