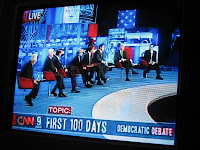 Over at NewsQuake, I just posted a piece about last night's Democratic debate. Despite the multiple efforts of John Edwards to pass his opponents on the inside rail, and despite some real disagreements about Iraq, immigration, and the role of English as this nation's "official language" (only crusty Mike Gravel raised his hand on that one), I was more struck by the repeated declarations of unity. I began this way:

The reaction to last night's Democratic debate began before the bloody, penultimate episode of The Sopranos could even get underway. According to this CNN dispatch, Nation columnist and author Eric Alterman (the only national pundit whose sister I dated in high school) was actually ejected from the spin room up in New Hampshire. On the other side of the aisle, Michelle Malkin proudly declined to turn on her television. In fact the debate itself came up short in the sound-and-fury department. Standing behind their podiums for the first hour, the field of candidates resembled eight tiny action figures in conservative suits. They seemed caught between pledges of unity--a nice touch for the always schismatic Democrats--and the understandable urge to separate themselves from the pack.

What we got, then, were mostly variations on the same theme. Disagreements did erupt, of course. John Edwards, with his sagging poll numbers, was quick to deny the actual existence of the War on Terror. "It's a bumper sticker," he insisted. "It's a political slogan. That's all it is, that's all it's ever been." Hillary Clinton was having none of this--which is to say that no senator from New York can afford such a rhetorical ploy. But even as the discussion about Iraq heated up, Joe Biden rushed in with a Band-Aid. "I don't want to judge them!" he remarked, when the schoolmarmish but efficient Wolf Blitzer asked him to condemn his colleagues for their votes on the latest round of war funding. "They worked hard! These are my friends!" And not too much later, Clinton added: "The differences among us are minor."