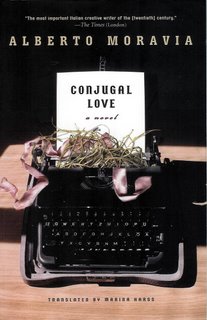 Comments:
At least "Contempt" has Brigitte Bardot going for it, eh?

Moravia, by the way, is a popular writer here in Berlin; Moravia, Houellebecq, Susskind, Jelinek...I'm sensing a pattern...

Excellent piece - I feel as if I'd been there with them... and thanks for the tipoff to WWB, it looks very interesting.

I'm a big fan of Moravia.His work captures the world in all its textures and emotions. Discovered him on this book site.