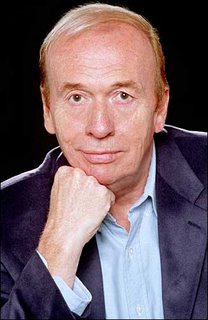 I'm sorry but Geoff Emerick is a jerk. I read his book and it is so blatantly pro-Paul anti-everyone else (He's really hard on George, calling him 'sullen' and 'moody' and Ringo, stating that the drummer didn't have much of a personality because he never spoke to him.) Gee, I wonder why. He refers to George and Ringo as the 'bottom-tier' Beatles.

He so obviously has a man-crush on Paul and is trying to hog the limelight for his work with the Beatles like so many other bottom feeders out there.

Most of his comments fly in the face of George Martin's commentary and we know that Martin was the real genius. Also, Emerick is presumptious about the Beatles' friendship and personality, making comments about how they were feeling during significant songs, etc. Don't like him, think he's an idiot. Don't buy his book, its crap. Again, apologies but its true.

Many thanks for stopping by, and for leaving that comment. My impression of Emerick and his book is quite different from yours. Clearly he felt more of a bond with Macca, and worked with him more consistently during the post-Beatles era. But he's not pretending to be the definitive Boswell of the Fabs--just giving his own impressions. If he remembers George Harrison as sulky and withdrawn, why shouldn't he say so? Nor does Emerick pretend to any intimate friendship with the Beatles. He's writing about a professional relationship. Whether his recollections dovetail perfectly with George Martin's is also beside the point.

well you can't please all the people, can you, mr augustine. i for one heard quite a few of these stories through Richard Lush and Martin Benge two guys who were there - Richard spent time with Geoff helping Geoff confirm his memories [or renovate them in some cases]. and if anything geoff's writing is eminently fair by comparison with the opinions of others.

you "know" that martin was the real genius?? jesus, talk about presumption. how much did george m do outside of the beatles that is/was 'genius'? nothing i've heard about.. and i've been paying attention.
mr emerick is writing his version of the time and makes no pretention about it being just that...

seriously my bet is for Geoff's version - so much of it matches in the main with other versions of the time - and in fact if you look at what else Geoff has done since you'll see the mark of this man. even George, and John - both of whom get some less that flattering description in the book used him long after the beatles were over.

as for steven augustines 'review' i think it displays it's 'genius' louder than anything i could say. treat it with all that it's due

the book is one of the best about the beatles and music recording i've ever read.

Well, Ali, I think that yours is a very one-sided argument. I did read this book, and if you REALLY read the book, you would have caught that Paul was really the only one who he was close to. I'm thirteen and I caught that. He made the 'bottom-tier' remark because aside from some Harrison compositions and Ringo vocals, they hardly participated in anything else. The whole sound of half the Beatles' albums were created by Geoff Emerick. John Lennon did suggest several things to Emerick, and he was the only one who could figure out that the 'Dali Lama shouting from a mountaintop' sound would need to be put through a Leslie, among other technical things of that sort. Being opinionated is one thing, being close-minded is another. He was not denying the genius of George Martin, he was merely clarifying it. George Martin was the classical side of the Beatles, and Geoff Emerick was the technical side. I'm not sure exactly how exponential your vocabulary is (because your opinions sure aren't), but I think you know the difference.
Give the guy a break.
--Kat

Remember this a memoir, nothing else. A memoir is a reflection of the person who wrote it, as they recall things in their own perspective. Emerick states exactly how he feels about all The Beatles, and George Martin, and other engineers & "button-pushers". He liked some, didn't like others. He is providing the readers his feelings about Harrison's guitar playing, Martin's pride, Paul & John's respective genius. It's his memoir & therefore he can feel however he wants! It's only his perspective, his opinion of these people, which is what a memoir is. It's actually incredibily insightful b/c it not only provides the technical aspects of the recordings, but also what personal behaviors & decisions were made & how Emerick perceived them. It's funny how even fellow engineer Ken Scott (who replaced Emerick when Emerick walked out during the White Album sessions) doesn't even get it. If you want to complain about Emerick, then write your own book!

Have to come to Ali's defense. Much of what Emerick says in his book is absurd. The notion that he and Paul alone were to credit for "Eleanor Rigby"! Sorry Geoff, but I think it was George Martin's brilliant score, inspired by Bernard Herman, and not your close micing that defines the song. It's almost pathetic the way Emerick declared himself a "hero" for doing things in the studio that were part of his job or merely skills any competent balancing engineer should have had. I don't mean to suggest that Geoff didn't bring something to the table in therecording of the Beatles, but does he have to negate the work of others simply to build himself up or use his book to attack coworkers in asides that have nothing to do with the subject of the book.

Not to mention his account is sometimes sloppy. His story of the recording of Love Me Do could not have happened as he describes it can clearly contradicts the official records of those events. Okay, no ones memory is perfect but that's what research is for.

Overall, even with the bias for Paul, it is still a worthwhile and enjoyable read but its beyond me that anyone couldread it and not find Emerick just a little pathetic.

You're right to say that there are moments when Emerick inflates his own contribution. But I think he brought far more ingenuity and art to the table than your typical balancing engineer. He had a major impact on the sound of those records, and he's justifiably proud. There are some petty moments (his slagging of Rubber Soul is hard to tolerate) and inaccuracies, but I find the book fascinating nonetheless. Not pathetic.