On Tuesday night I sincerely believed I was too tired to think straight. I got in bed, fired up Toru Takemitsu's From me flows what you call Time, and assumed I would conk out long before that beautiful, gong-tormented piece of music was over. No dice. I woke up. At 1:30 AM I was having one of those terrible sessions of wakefulness on the sofa, eating pretzels and reading Martin Amis. So last night I took an Ambien plus the freaky-looking fish oil pill the doctor recommended--to keep the lid on my perfectly okay cholestorol numbers--and looked for something to thumb through. I grabbed What the Traveller Saw, a delightful collection of photos taken by Eric Newby on his (many) peregrinations. His visual sense resembles his verbal sense: crisp, intelligent, and unfailingly modest. 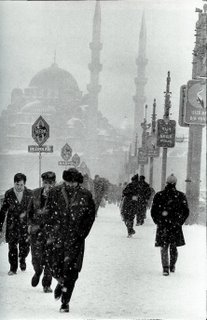 For some reason I found myself studying this shot of the Galata Bridge in Istanbul--possibly because I've been there, albeit in sunnier weather. In the background you see the dome and minarets of the New Mosque: new meaning it was completed in 1663. The falling snowflakes, some so close to the camera lens as to resemble pingpong balls, make for an intensely atmospheric image. (It must have been the Ambien, too.) Anyway, the late author also supplied some brief, irresistible texts. Here he talks about the fat ledger book in which he took notes during his boat trip down the Ganges:

Even the thought of losing the Gujurati account book filled me with apprehension, and then, one day, I did lose it. Waking up in what had been a church hall in Bihar in the middle of the night, plagued by rats, I realized I had left it on the platform at a railway junction, miles away. Arriving there by cycle rickshaw in what was by then the early hours of the next morning, I found that there had been no cause for alarm. "Sir," said the ticket clerk, when he handed it over to me, "it is only a book of writing, of no value to anyone at all."

Touché! There is more I could write but the meter is running. So I'll leave you with two final notes. Steve Augustine has now plunged into the blogging thing--my favorite post so far is this fictionalized note on Beatlemania, touching and also full of his characteristic saeva indignatio. (Of course I speak fluent Latin--who doesn't?) And here's Gary Wills on Spiro Agnew, from my dogeared copy of Nixon Agonistes. Boy, is he good. I couldn't get far with What Paul Meant, but the older books are just right for this nervous non-believer:

Spiro Agnew's career has about it a somnambulistic surefootedness, an inevitability of advance, that reminds one of Mencken's Coolidge, of the juggernaut of snooze: "There were massive evidences of celestial intervention at every step of Coolidge's career, and he went through life clothed in immunities that defied and made a mock of all the accepted laws of nature." In an election-eve TV broadcast, Hubert Humphrey proudly displayed Ed Muskie, his monkish second-string Eugene McCarthy. Nixon, on the same night, sat alone, remasticating answers for Bud Wilkinson, his kept TV interrogator. No Agnew in sight. It was said that Nixon regretted his choice, his deal with Thurmond. But Agnew was a guided missile, swung into place, aimed, activated, launched with the minute calculation that marks Nixon. Once the missile was fired, the less attention it drew to itself the better--like a torpedo churning quiet toward its goal. Agnew has a neckless, lidded flow to him, with wraparound hair, a tubular perfection to his suits or golf outfits, quiet burbling oratory. Subaquatic. He was almost out of sight by campaign's end; but a good sonar system could hear him burrowing ahead, on course.

Comments:
Nice photo.
In a bookstore in London I saw Edmondo De Amicis's Constantinople and was tempted to buy it. I didn't, since I will enjoy it more in its original language (if I can find it).