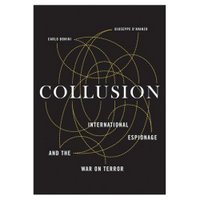 Welcome back, everybody, and Happy New Year. As you may have noticed, there's been a lengthy intermission here. I'm tempted to plead the seasonal blahs--the entire month of December brings out my Inner Scrooge--but the real reason was overwork. I translated a short book of ruminations by Saul Steinberg and a heftier book about post-9/11 espionage, Collusion, and after a long day of wrestling with subjunctives, I felt too beat to blog. I stopped reading. My eyes were turning to gelatin. Now, however, I'm almost out of the woods. So why not resume broadcasting?

By now I've got a backlog of topics to blog about. But I'll start off easy, with my Best of 2006 thing that appeared in Newsday on Sunday. Apparently I read almost nothing thicker than a beef patty last year. Here's what I wrote:

Thinking back over the last year, my first impression was that I had read very few books. In fact I had read a good number, but many were so slender as to be almost invisible when viewed from the side. Here, then, are some of my favorites, in order of increasing girth. The tiniest (and yet the weightiest) was The Zürau Aphorisms of Franz Kafka (Schocken), the whole of which could have been printed on a cereal box.

I suppose two titles are tied for second place: David Kipen's sparkling little tour of the screenwriting universe, The Schreiber Theory (Melville House), and The Letters of James Schuyler to Frank O'Hara (Turtle Point Press). I greatly admired Philip Roth's Everyman (Houghton Mifflin) for its death-defying concision, and Grégoire Bouillier's The Mystery Guest (Farrar, Straus and Giroux) for its sheer weirdness and comical woe. Marjane Satrapi's latest also won my heart, although I wish Chicken With Plums (Pantheon) had a little more of the graphic pizzazz on display in her previous books.

Now we're actually moving into the ranks of the tubbier titles. In The Discomfort Zone (Farrar, Straus and Giroux), Jonathan Franzen wrestled with the more unsavory aspects of his own persona, and pinned them to the mat; the result was an eloquent and unflinching collection of essays. David Galef ventured something even more unsavory in How to Cope with Suburban Stress (Permanent Press)--a pedophile with a human soul--and earned his reader's sympathy the hard way. In Persuasion Nation (Riverhead) delivered everything we've come go expect from George Saunders (brilliant ventriloquism and pan-blackened satire), plus a couple of pieces that seemed to point in a gentler direction. And finally, I was entertained and enlightened by a trio of genuinely fat books: Peter Behrens' The Law of Dreams (Steerforth), Phillip Lopate's American Movie Critics: An Anthology From the Silents Until Now (Library of America), and Michael Hofmann's Twentieth-Century German Poetry (Farrar, Straus and Giroux).

I promise to read some thicker books in 2007. Meanwhile, check out the Best of 2006 pieces by the other Newsday top guns, my favorites being this one and that one. Call me prejudiced.