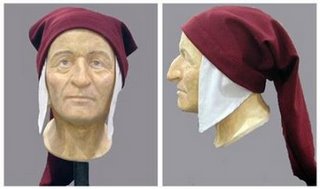 So it turns out we were wrong about Dante's nose. Traditional images of the poet--based on after-the-fact portraiture and a suspicious number of "death masks"--have always featured a major-league aquiline nose. It seemed appropriate. It was Hazlitt who called the nose "the index of the will," and Dante's pointy proboscis was an emblem of sorts: for haughtiness, determination, wisdom, and downright superiority. But now Giorgio Gruppioni, an anthropologist at the University of Bologna's campus in Ravenna, has done a more scientific job of reconstructing the poet's appearance. Dante's bones were last exhumed in 1921, at which pointed Fabio Frassetto made precision measurements of the skull. The team in Ravenna has used Frassetto's data--plus (here's my favorite part) a bootleg plaster cast made by the naughty professor when nobody was looking. Anyway, Dante's nose was a mite snubbier, his features more prosaic. Gruppioni says: "When we finished with it, he looked more ordinary, like the guy next door. I thought this would have caused a scandal but most people think this is more human."

Your blog site is nice and clean. The articles are very interesting. It’s a good source of information about Cosmetics Plastic Surgery. Thus, I’m looking for a blog site where my Puerto Rico Nose Job The best of cosmetic plastic surgery is offered at our Puerto Rico plastic surgery center. Get a rhinoplasty or nose job in San Juan now! This way we can share our great ideas in Surgery world. It’s a great blog. I really appreciate it. Keep it up!

It was really very nice information you have share about the plastic surgery. I too planing to have an nose surgery and your blog is very helpful to . Thank you and keep sharing such nice information.