All you need is Love?

Will I rush off to buy the new Beatles recording, Love, on its first day of release? Let me hang my head for a moment and confess that I already procured a high-quality MP3 version off the Internet, and have been listening to it with curiosity, pleasure, and occasional stabs of chagrin. And let me point out that contrary to the blitz of EMI-orchestrated publicity, this is not a new Beatles recording. Not long before his death, George Harrison gave his blessing to a proposal by an old friend, Guy Laliberté, the billionaire founder of Cirque du Soleil: might the arty (and, yes, occasionally jaw-dropping) Canadian troupe choreograph a show to Beatles music? 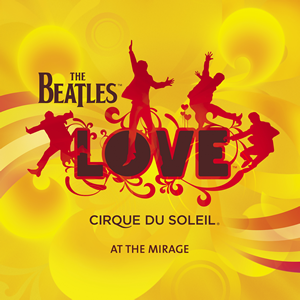 Although the Beatles have historically refused such licensing opportunities--no car commercials or deodorant jingles for the Fab Four!--McCartney and Starr agreed. They then coaxed George Martin out of retirement to do the job. No doubt the heroic producer, whose hearing began to fail him several years ago, couldn't resist one more lap around the track with his greatest discovery; perhaps he also wished to erase the memory of his earlier curtain call, the celebrity-strewn embarrassment of In My Life. In any case, Martin spent many months clambering up and down the Everest of modern pop music that is the Beatles' output . Some songs he would simply remix and remaster. Others he would reconfigure into mash-ups--and to make these musical vivisections work, Martin and his son Giles combed through the catalogue for stuff in related keys and with compatible tempos. The result, with a glitzy cover that the stylish Fabs would never have endorsed, is hitting the stores as I speak. Am I going to buy it?

Hold on, I’ll get to that. First I'll address the improved sonics, which are glaring even in a compressed format like MP3. The original CD transfers, which date back to the digital Stone Age (i.e., 1987), are famously rotten--leave it to EMI to treat their crown jewels like paste diamonds. But I just listened to both mixes of "All You Need Is Love" back-to-back, and the comparison is devastating. Never again will I cue up the version on the Magical Mystery Tour CD, with its watery opening chorus stuffed into the left channel and feeble drum sound. In a case like this, Love has made its predecessors instantly obsolete.

The Martins have worked similar magic with the murky "I Am The Walrus" and with their pellucid take on "Something," whose strings are now luxuriously audible down to the last, pinging pizzicato. In some cases, of course, there’s not much room for a sonic upgrade. The various elements of "I Want to Hold Your Hand," committed to four-track tape on a single October afternoon in 1963, then mixed down to mono and crude stereo the following Monday, can no longer be effectively disentangled. The producers content themselves with inserting the hysterical white noise of a screaming audience (which I could have lived without). "Help," too, sounds much like the original recording. But I was surprised to discover that I prefer the version of "Hey Jude" on Past Masters, Volume 2. On the older disc, McCartney’s vocal has a startling immediacy; here the producers have opted for a more recessive sound, and muffled the distinctive jangling piano. The result is more anthemic but less intimate--a definite loss. 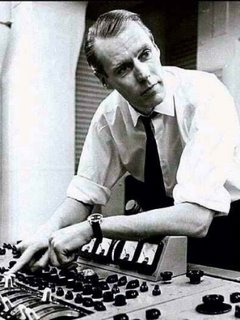 Things get more problematic, though, when pere et fil begin to diverge from the original recordings. I don't mind George and Giles stripping the instrumental track off "Because"--the a cappella version already appeared on Anthology 3, not to mention a host of earlier bootlegs. True, the producers inserted longer pauses between the phrases, but that too seems like a forgivable dramatic device. And some of the mash-ups make perfect thematic sense. Who wouldn't want to mate "Strawberry Fields Forever" with "Penny Lane"--two brilliant samples of childhood reverie, the one wistful and increasingly dark, the other shining with psychedelic clarity? And why not match up the droning exoticism of "Tomorrow Never Knows" with George Harrison's more reverent homage to his Indian sources, "Within You Without You"? Even the best of these hybrids will never overshadow the originals--but then again, they're not meant to. Not even Danger Mouse imagined knocking the Fab Four out of the ring. The idea is to make hear us familiar sounds with at least a fraction of the explosive newness they once conveyed. That's no mean feat.

In fact, based on some of the dodgier segments of Love, it’s horribly difficult. Which is another way of saying that I find many of the mash-ups on this disc plodding and pedestrian. The first time you hear them, you're busy tabulating all the beloved bits and bobs: just the fade-out to "Strawberry Fields" includes the French horn licks from "Sgt. Pepper," George Martin's sped-up piano from "In My Life," vocal accents and the Baroque trumpet solo from "Penny Lane," harpsichord and cello from "Piggies," and the final, rollicking chorus from "Hello Goodbye." But after repeated listenings, these combinational pleasures start to pall: it's a little like doing a jigsaw puzzle for the fifth time. Yes, the crunchy horn section from "Savoy Truffle" fits very nicely atop "Drive My Car," as does Macca's ferocious guitar solo from "Taxman"--but right around the time Martin stirs the verse from "What You’re Doing" into the pot, a terrible whiff of gimmickry begins to waft from the invisible, laser-etched grooves of Love. The Beatles could be campy, lazy, self-indulgent, but they were seldom corny. These mash-ups often are.

So, alas, are the sound effects, which tend toward wooden literalism. When Lennon mentions "Henry the horse" in "For the Benefit of Mr. Kite," we hear a faint whinnying in the background. Worse: at the end of "Julia," that delicate marvel of death and transfiguration, we hear an ambulance siren, clearly alluding to the car accident that killed Lennon's mother in 1958. The Fabs, of course, adored sound effects. God knows how many hours were consumed adding that menagerie of barks, howls, and hoof beats to "Good Morning, Good Morning." What's getting killed here, however, is the metaphoric richness of the song. You might as well insert a whirring pepper mill into "Sgt. Pepper," or a ringing cash register into "Baby You’re a Rich Man." In the olden days, at least, these boners would have been buried in the mix. Now you can hear them with dismaying clarity. 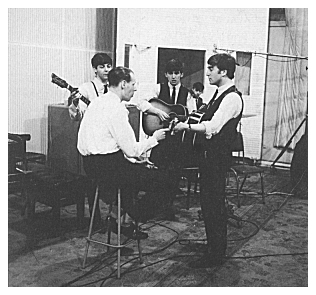 Ah, back to that mix. Love is being released not only on conventional CD but in DVD 5.1 format--configured, that is, for a six-channel audio system. Since I have only two speakers (three, technically, if you count the busted one I’ve been too cheap to repair), I won’t be getting the full Sensurround effect. I do find a certain irony in this, since the Beatles dwelled in a monophonic universe for much of their career. As late as 1967, when Geoff Emerick was mixing down the jam-packed tracks of Sgt. Pepper, he and the boys were still monitoring the results through a single speaker. In his recent memoir, Here, There and Everywhere, Emerick practically warns his readers away from the two-channel product: "True Beatles fans would do well to avail themselves of the mono versions of Sgt. Pepper and Revolver because far more time and effort went into those mixes than the stereo mixes."

What true Beatles fans will get, however, is the spatial opulence of DVD 5.1, which is now being touted as the manifest destiny of recorded music. That may or may not be the case. There are philosophical arguments to be made on both sides, some of them fairly vituperative, as to whether music is best enjoyed seated at the epicenter of an six-channel audio Orgasmatron. Me, I’m happy to have all the options: vinyl, CD, and DVD, mono and stereo, the canonical releases and the ocean of outtakes and alternates available on bootlegs. But there’s no question that EMI will eventually release the entire Beatles catalogue in DVD 5.1, simply because there’s so much money to be made. And I would guess that when every last song has been remixed and remastered and dumped into the marketplace, Love will end up in the novelty bin, having been rendered as obsolete as my pathetic Magical Mystery Tour disc.

In the meantime, it will sell by the truckload. A review like this--no, a hundred reviews like this--will stop nobody from snatching the disc off the shelves. And despite the strictly illegal MP3s I already downloaded, and all the bitching I just did, and my fussbudget reservations about listening to "Hold Me Tight" on an over-the-top home theater system, it probably won’t stop me either. The word, like it or not, is Love. I better go order my copy.

Comments:
I've got a GREAT idea! A COLORIZED version of "A Hard Day's Night"! That's what I hate most about late-model capitalism: how the possible can't rest until it becomes the mandatory.

Some of my best friends were responsible for those barks and howls on "Good morning".

All kidding aside, I enjoyed the review and must admit that I, too, am likely to plunk down my $20.

The presents have all been opened and good 'ole mom gave me the copy of LOVE. I had listened to it quickly in the music store, giving each track a thirty second listen except for Because, which held me due to the pregnant pauses between lines. That track I listened to for longer, hooked by the haunting a capella vocals. That song ended up the lynchpin to a psychedelic afternoon back in the early 80's when the woman who became my wife and I fell into one another for good. As a piece all its own, the music set free if not divorced from its origins, it works for me.

Just a quick correction - what you hear at the end of "Julia" is not just an ambulance ... it is a snippet from "Revolution 9". But, to be fair, perhaps it was included for precisely the reason you stated ...