Odds and ends: the indefatigable Mister Amis, Lennon's house, It's Not Too Bad, Takemitsu, death of the book review

Having been soundly thrashed for Yellow Dog, and sorrowfully paddled for The House of Others (in the United Kingdom, anyway), Martin Amis is soldiering on. As he told Mike Collett-White at Reuters, he's already "repulsively far advanced with another novel. I'm almost 100,000 words into another." The new book seems to be a roman à clef--exactly the sort of thing that will get Amis drawn and quartered at the Groucho Club. Yet The Pregnant Widow, like the author's latest production, is also a tale of revolution: more specifically, the sexual revolution (if that's what it was) of the Sixties and Seventies. Here's Amis:

Writing about revolution, Alexander Herzen said normally one should be pleased when one order gives way to another, but it's not a child you're left with after a revolution, you're left with a pregnant widow, and there will be much terror and tribulation before that child is born. The father is dead, the child is not yet born. I think that is what has happened to feminism. It's only now in its second trimester. The baby isn't there yet. Dad is dead--patriarchy has gone, but the baby isn't there yet.

Hold onto your hats, folks. And if you've got any extra pocket change, put in your bid on John Lennon's former six-bedroom mansion in Weybridge, Surrey, now on sale with a floor of 5.95 million pounds ($11.1 million). Described by one Beatles Fan Club bigwig as "a nice house, in the stockbroker belt," it was the setting for a certain amount of extramarital shenanigans:

In 1968, while Cynthia was vacationing in Greece, Lennon invited Ono to the house known as Kenwood. The pair stayed up all night taking drugs and collaborated on what was to become the record album Two Virgins, released later that year. It was also the first time the pair consummated their affair. Cynthia Lennon...returned early from her vacation to find Ono both in residence at the house and wearing her bathrobe. The property was sold in the divorce settlement. 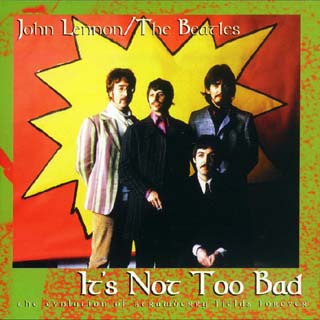 It was at Kenwood, too, that Lennon made his second round of demo recordings for "Strawberry Fields Forever," now collected on a superb bootleg called It's Not Too Bad. The disc actually begins with some crude sketches Lennon taped while he was in Santa Isabel, Spain, filming Richard Lester's How I Won The War. Next comes the stuff he recorded upstairs at Kenwood, using a pair of Brennell reel-to-reel machines. It's amazing how fast the song snapped into focus. What's even more amazing is the first take the Beatles recorded at EMI on November 24, 1966. Geoff Emerick describes that long evening in his recent memoir, Here, There and Everywhere:

The Beatles weren't ever especially fast at working out parts, and this night followed the usual pattern: several hours were spent routining the song, deciding who was going to play what instrument, and figuring out the exact patterns and notes they would play. Paul was still having a whale of a time with the Mellotron, so he decided he would man it during the backing track. Ringo busied himself by arranging towels over his snare drum and tom-toms in order to give them a distinctive muffled tone. Off in a corner, George Harrison was experimenting with his new toy--slide guitar--practicing the long, Hawaiian-style swoops he planned to play on his electric guitar, punctuating John's more straightforward rhythm part. Following a long period of rehearsal, they finally decided to make a first stab at recording a backing track.

It's interesting to glimpse George Harrison discovering the slide guitar, which would be his sonic signature throughout the rest of life. The towels throw some new light on Ringo's thudding drum sound. In any case, the first take was an absolute beauty: much quieter and more wistful than the final product. It remained in the EMI vaults until 1996, when it was released on Anthology 2. But even there, George Martin polished up the rough edges and inexplicably mixed out the backing vocals, which appear in their full glory on It's Not Too Bad. 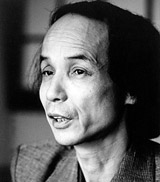 On a different musical note, I was foolishly trawling the Web late last night and came across Jan Swafford's Slate article about Toru Takemitsu. Having read and admired Swafford's bio of Charles Ives--although I now can't seem to locate it in my landfill-sized book collection--I was eager to learn about his nominee for the Best Film Composer Ever. Takemitsu, who wrote not only reams of music but a series of detective novels to boot, sounded like my cup of tea. I had to hear some of his stuff right now. And that, ladies and germs, is where iTunes comes in handy. After quickly scoping out what was available, I downloaded A Flock Descends into the Pentagonal Garden. On this laughably inexpensive, pristinely recorded disc (God bless you, Naxos), the excellent Marin Alsop leads the Bournemouth Symphony Orchestra through five pieces, from "Solitude Sonore" (1958) to "Spirit Garden" (1994). What gorgeous music! On these pieces, at least, Takemitsu steers clear of the hummable melody--what we get are vast, unpredictable clouds of orchestration. Some of the gentle, chamber-music-like passages for reeds, flute, and percussion remind me of Mahler. As Swafford points out, that's exactly what Kurosawa requested during the filming of Ran:

For the epic battle sequence of Ran, Kurosawa's version of King Lear, the director told Takemitsu he wanted something like Mahler. What Takemitsu gave him is and isn't Mahler. It has a big orchestral sound spread over wide spaces and a Mahleresque sense of doom, but the music is modern, keening with tragedy and horror, utterly unclichéd, as indelibly wedded to the images as the shower scene in Psycho. Together, the music and visuals make the battle in Ran, I propose, one of the most eloquent sequences in all of film.

Finally: the book review section seems to be on the verge of extinction. How am I going to make a living? Oh, right: blogging.

Comments:
At the notable exception of Tibor Fischer, most reviewers of House of meetings had very positive things to say - and quite a few reviews were even extremely positive. I know everyone was expecting Amis to get a good (and undeserved) trashing again, but it did not happen. House of meetings is a great book.

Point taken. By now, the release of a new Martin Amis novel seems to set the stage for a demolition derby--but in this case, there were some extremely positive UK notices. So I stand corrected. And I look forward to reading the book myself.

In a complete change of subject - ah, the lovely George Harrison - so lovely. Just had to express it :).

Amis will benefit from the inevitable Tibor Fischer backlash on the horizon...

Nice post, its a Super cool blog that you have here, keep up the good work, will be back.