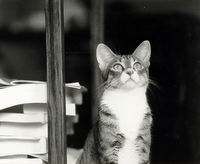 First Eric Newby--and now Kerry's chubby, cheerful companion of the last decade and half, Molly. The Molecule, as she was often known (yes, there were other nicknames, hundreds of them, but it would require a separate blog to list them all) could be a little skittish if you approached her too quickly. Given time and elbow room, she was an amiable creature, never more so than when I was ferrying her back home from one veterinarian or another. Once Kerry had unzipped the roof of the Sherpa, Molly would stick her perfectly circular head out and study the passing the terrain with an appealing gravity--with, you might say, a lust for life. She had big ears and a two-tone nose. Despite her avoirdupois, she had a dainty way of moving around Kerry's apartment, not unlike Christopher Smart's famous feline, Jeoffrey:

For God has blessed him in the variety of his movements.
For, tho' he cannot fly, he is an excellent clamberer.
For his motions upon the face of the earth are more than any other quadruped.
For he can tread to all the measures upon the music.

I assume she's now in some four-legged Heaven with plenty of catnip, turkey breast, sunlight, and raggedy armchairs. But she'll be missed.

Comments:
All my thoughts are with you... I have a fourteen years old cat, and I can well imagine how it will be like when the dreaded hour has come.

Molly and Kerry constitute proof that, pace Dr. Johnson, who personally fetched oysters for his cat Hodge so as not to inconvenience his servant, there is, in fact, no shame whatsoever in being, as DJ put it, "employed for the convenience of a quadruped."