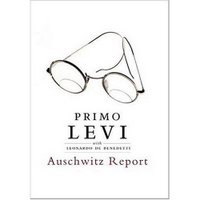 In The Observer (via Literary Saloon), Jonathan Beckman slaps Verso on the wrist for the company's bait-and-switch publication of Auschwitz Report by Primo Levi and Leonardo De Benedetti. Beckman does acknowledge the book's value as a historical curiosity. But as he points out, the 48-page document, written shortly after both authors were liberated from the camp in the summer of 1945, was mostly De Benedetti's work. (In her biography, Carole Angier calls it "a truly impersonal, factual report.") So the publisher has been naughty indeed to pitch the book as a precursor to Levi's masterly Survival in Auschwitz:

De Benedetti's name does not sell books. So Verso has dolled this up as the work of Levi, blazoning his name on the front of the book, at least five times bigger than the words "with Leonardo De Benedetti." Levi alone merits a photo and biographical note on the dust jacket. Unforgivably, the only illustration on the cover is Levi's distinctive bottle-lensed glasses, guaranteeing the reader the "authentic" experience with an A-list Holocaust survivor. Piggybacking sales on Levi's name is tasteless, but to misrepresent the Holocaust's historical record is insidious, when absolute fidelity to truth is the only bulwark for sustaining remembrance against the gainsayers. The contortions of the introduction, which attempts to connect the Auschwitz Report and Levi's later work, are spurious and crass.

Beckman notes one surprise: Auschwitz and its satellite camps boasted more medical facilities than one might have expected, including an "otorhinology and ophthamology clinic." He's certainly not naive enough to chalk this up to compassion: the Germans kept the prisoners alive only in order to squeeze more labor out of them. Yet I was reminded of a ghastly passage I read a couple of weeks ago in Eugen Kogon's The Theory and Practice of Hell, a classic 1950 account of the camps recently reprinted in paper by FSG. The author (below) was a prisoner in Buchenwald, and in one chapter, called "Recreation," he recalls:

In May 1941 Buchenwald began to enjoy a unique form of relaxation--motion pictures. The Buchenwald movie theater was the first in a German concentration camp, and it seems to have remained the only one. Permission to establish it was wheedled from the SS by the prisoner foreman of the photo section, who dwelt on the enormous profits to be made from exhibiting, at thirty pfennigs a head, ancient, worn-out films costing but thirty-five marks apiece... The procurement of films from the UFA Company in Berlin was not always an easy matter. SS men had to be bribed, and every strategem had to be employed to keep on sending couriers to the capital. Both entertainment and documentary films were offered, weekly or biweekly, with longer interruptions.

Many prisoners drew strength from the few hours of illusion given them by the movies; others, faced with the ever-present misery in camp, could never bring themselves to attend, especially since the theater was used also as a place of punishment. The fact that it was used so sprang from no particular sadistic streak on the part of the SS: the hall merely happened to be suitable and convenient--spacious and gloomy, the ideal place for the whipping rack, which was carried out to the roll call area only when a special show was put on. The movie theater also provided storage space for the gallows and the posts, inserted in special holes, on which prisoners were strung up.

This sort of thing leaves me speechless. So does the news that masochistic magician and escape artist David Blaine has Primo Levi's number tattooed on his arm. Blaine is talented, buff, charismatic. But to confuse his high-end carnival act, with its splashy confinements in a fishbowl or block of ice, to the lethal servitude of a concentration camp, is tasteless beyond measure. If he truly wanted a string of digits on his arm, he should have chosen something more appropriate--say, Evil Knievel's social security number.