Yesterday, when I wasn't busy atoning, I met Kerry at the Neue Galerie for a spot of Klimt. I use the word advisedly: the top floor of the museum is currently closed for installation, which leaves only the trio of smallish rooms on the second floor. There you find five splendid Klimts--given the stiff $15 admission, that comes to three dollars per painting, or ten cents per sqaure inch of gold leaf--plus some related drawings and paintings in the adjacent rooms. The grabber (and not incidentally, the priciest painting on the planet, for which Ronald Lauder shelled out $135 million) is Adele Bloch-Bauer I. Am I dwelling on dollars too much here? Perhaps. Yet the painting itself--a Byzantine fantasia of precious metals and decorative swirls, with the subjects's all-too-human flesh suspended orchidaceously in its midst--is itself a paean to money and sex. Or so it seems to me. Bloch-Bauer's niece Maria Altmann denied any extracurricular tomfoolery between the painter and his subject, and Christopher Benfey, in the article cited above, basically compared Adele to a distracted soccer mom. Peter Schjeldahl thought otherwise--to him, this sugar magnate's wife resembles a Venus flytrap in gold lame--and so do I. 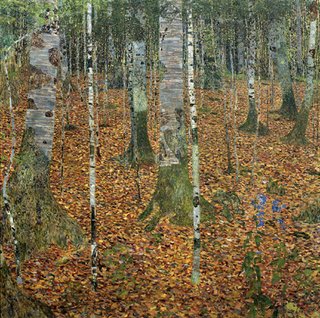 But let's not overlook the other paintings in the room--you know, the cheap ones. Directly across from Adele Bloch-Bauer I is a scintillating (how literal that word feels when you're writing about Klimt) landscape of a birch forest. On the fatter, older birches, where the bark has peeled away, the trunks have a near-palpable gnarliness; the slender saplings dissolve into vertical stripes, and the bluebells in the right foreground look like interlopers in the Land of Decay. It's beautiful. You can't stop looking at it: what a different painter Klimt was when he checked his neuroses at the door. Nor should we shortchange the other, more casual portrait of Adele, nor the drawings in the dimly-lit room by Klimt and his naughty-boy acolyte Egon Schiele. (An anecdote from Paul Hofmann's The Viennese: Splendor, Twilight, and Exile: the youthful Schiele brought a sheaf of work to Klimt's studio and asked the older artist, "Do I have talent?" Klimt, whose brindled cat often sat on his shoulder while he worked, scanned the work and said, "Much too much.")