I was tremendously sad to read about the death of Eric Newby. It's true that the author, editor, and inveterate traveler crammed an awful lot of mileage into his 86 years. But Newby was something extraordinary: a missing link between the great Britannic wanderers of the Victorian era and such contemporary jungle nuts as Redmond O'Hanlon. And the funny thing is, he nearly missed his vocation altogether. For more than a decade following the end of World War II, Newby toiled away in the British fashion industry, peddling some of the ugliest clothes on the planet. (He was eventually to chronicle this period in Something Wholesale: My Life and Times in the Rag Trade.) 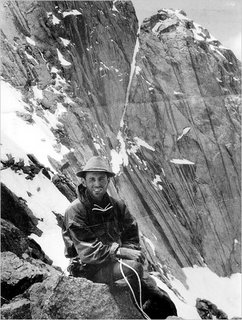 Fortunately, he reached the end of his haute-couture tether in 1956. At that point, with the sort of sublime impulsiveness that's forbidden to fictional characters but endemic to real ones, he decided to visit a remote corner of Afghanistan, where no Englishman had planted his brogans for at least 50 years. What's more, he recorded his adventure in a classic narrative, A Short Walk in the Hindu Kush. The title, of course, is a fine example of Newby's habitual self-effacement, since his journey--which included a near-ascent of the 19,800-foot Mir Samir--was anything but short.

Newby was always a less acidulous writer than, say, Waugh (who contributed a short preface to his first book). But he was among the keenest and funniest of literary travelers, and unlike many of his colleagues, he never fell back on cranky solipsism or coy misanthropy. In fact he relished other people: his books are filled with indelible portraiture of his companions. A Short Walk introduced us to the madcap Hugh Carless and to Newby's wife, Wanda (who would play a starring role in such subsequent chronicles as Slowly down the Ganges). In Love and War in the Apennines we seem to meet at least half the inhabitants of a tiny Italian village--and not a single one conforms to the lazy image of the carefree contadino. For Newby, a human being was truly terra incognita, and he explored each one anew.

Sound bites don't really do justice to Newby's peregrinations: they require a sense of momentum from the reader. Yet I couldn't resist quoting a couple of examples. First, to get a sense of his comic register, listen to the author get in his digs at Britain's special relationship with the violence-prone Abdur Rahman of Nuristan:

Officially his subsidy had just been increased from 12,000 to 16,000 lakhs of rupees. To the British he had fully justified their selection of him as Amir of Afghanistan and, apart from the few foibles remarked by Lord Curzon, like flaying people alive who displeased him, blowing them from the mouths of cannon, or standing them up to the neck in pools of water on the summits of high mountains and letting them freeze solid, he had done nothing to which exception could be taken.

Zing! (That brief paragraph is, alas, weirdly apposite to America's own Afghan quagmire.) But here's another bit, from Slowly Down the Ganges, which shows off Newby's lyrical eye for the terrain:

At about six the sky to the east became faintly red; then it began to flame and the moon was extinguished; clouds of unidentifiable birds flew high overhead; a jackal skulked along the far shore and, knowing itself watched, went up the bank and into the trees; mist rose from the wet grass on the islands on which the shisham trees stood, wrapped like precious objects in their bandages of dead grass.

No gushy exoticism, no fat, no poetry on stilts. Just curiosity and precision, which are among the ultimate tools for any writer, even the kind that seldom vacates his or her armchair.

Finally, a personal note. For the past few months, I had been interested in interviewing Eric Newby. The prospect of exchanging a few words with this brilliant man--assuming I could catch him in a stationary position--already had me hyperventilating. I explored the idea with a couple of magazine editors, and kept reminding myself to contact somebody at Lonely Planet. (It was this rough-and-ready travel publisher who did us all the great service of reprinting the bulk of Newby's work in paperback. Three cheers!) Now, of course, it's too late. I suppose the lesson is the same one we seem incapable of learning, year after year: carpe diem. Seize the day. Well, Newby certainly did.

Comments:
Thanks for these recommendations. I don't know his work, but now hope to. I appreciate anything that takes the armchair reader so far afield.